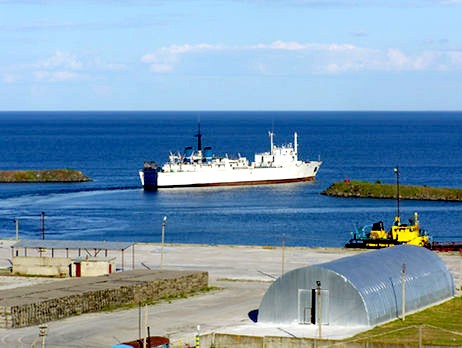 Black Sea is transformed to a chessboard at last years that U.S. and Russia make moves. As a consequence, we encounter news about Black Sea that surprise us. Especially right after Russia’s annexation Crimea, stress of the area is always high.

As tensions rise between Russia and Ukraine on the Black Sea, the US is upgrading several Ukrainian naval bases to give American and NATO warships the ability to dock just miles from Russia-controlled Crimea.

Centered at the Ochakiv Naval Base and the military facility at Mykolaiv — 40 miles east of Odessa and less than 100 northwest of Crimea — the American-funded effort includes reinforcing and upgrading existing piers and adding a new floating dock, security fencing around the bases, ship repair facilities, and a pair of brand-new Maritime Operations Centers from which Ukrainian and NATO forces can direct exercises and coordinate activities.

Ochakov, a port city on the Black Sea, was wrested from the Ottoman Empire in the late 18th century by Generalissimo Suvorov’s troops. Ochakov is the birthplace (or one of the birthplaces) of the USSR’s marine spetsnaz, and in 1968 the island of Berezan became the new stationing point of the 17th Naval Infantry Brigade transferred from Sevastopol. Following the collapse of the USSR, the 73rd Marine Special Operations Center of the Ukrainian Navy was established there followed by the 7th Naval Infantry Brigade consisting of underwater mining, underwater de-mining, reconnaissance and saboteur, and special communications units. This is a rough equivalent to the American Navy Seals.

According to Montreaux Convention, which arranges the rules the passing regime of Istanbul and Canakkale straits and foreign country limitations, U.S. or NATO ships are not allowed to stay at Black Sea more than 21 days. If the Ochakiv Base will be upgraded and ready to host NATO standarts, U.S. and NATO ships are likely to use the base docks for their requirements at allowed period. Of course this modernisation will annoy Russia side, because they will feel the NATO existence very near. We wonder the next move of Russia to prevent this.

Because Russian Admiral Vladimir Komoyedov describes the construction of the command center by the US in Ochakov near Odessa is evidence that the US has become “utterly shameless.” The next step in Washington may be the transfer of old American warships to the Ukrainian Navy. This was stated by the former Commander of the Black Sea Fleet, Russia’s Admiral Vladimir Komoyedov. “By and large, I do not see danger per se. Moreover, the Black Sea Fleet is now receiving new modern weapons: submarines, surface ships, new types of missiles. I think that the Americans will not match it in this part of the world, but, in my opinion, they have become utterly shameless in their endeavours. They’re jumping out of their own skin in order to reach Russia’s zone of responsibility…”

Probably we will see new movements at chess board and analyze in the near future.