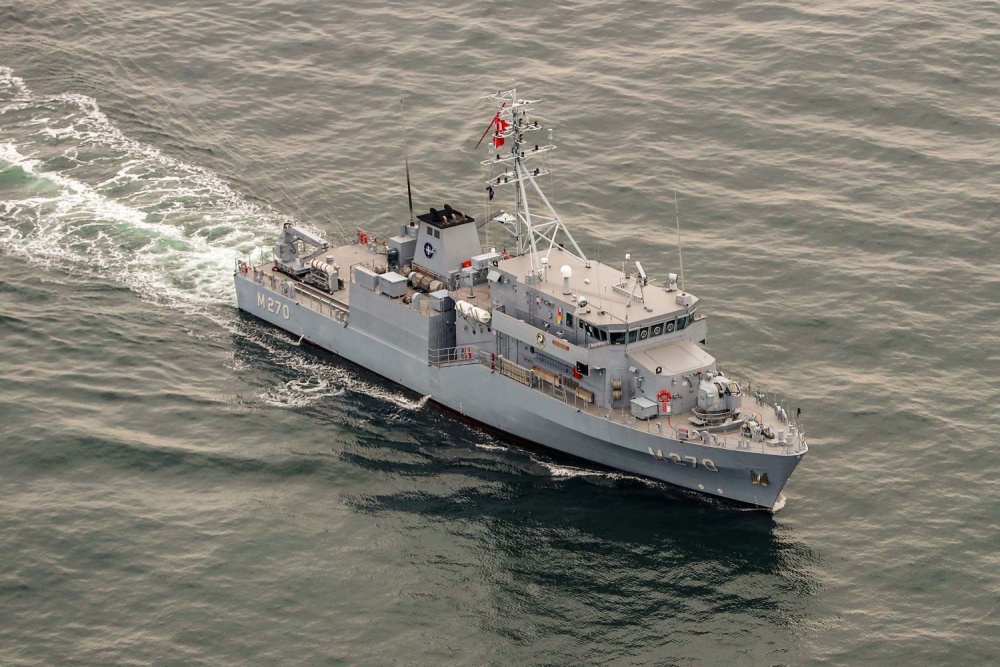 During routine mine countermeasure training in the Black Sea on 7th February 2018, Standing NATO Mine Countermeasures Group Two (SNMCMG2) ship, Turkish mine hunter TCG AKÇAY, discovered a sea mine from a previous conflict.
The mine was discovered at 8 A.M. local time while TCG AKÇAY, under the command of Turkish Navy Lieutenant Commander Abdullah Yıldız, was using her mine hunting sonar to scan the sea bed and the water below her. The crew detected an object, which was thought to be a potential mine.  TCG AKÇAY then used her Remote Controlled Mine Discovery Vehicle (RCMDV) to investigate the possible mine further.  The RCMDV is remotely controlled from the mine hunter and used to identify mine-like objects using an onboard camera. If necessary, the RCMDV can also lay a 100kg explosive charge to destroy the mine.
SNMCMG2 was conducting mine countermeasure training with the Romanian Navy just off the Romanian coast near Constanta when the historic ordinance was discovered.  The area in question is shown on maritime charts as a formally mined area and this means that this is likely to be an historic mine.  The mine sits on the seabed at approximately 40 metres depth.  Images show that the mine is still attached to the ‘sinker’ or weight, which means that it likely didn’t deploy correctly when it was laid. Normally these mines were suspended mid water, attached to the weight on the seabed.
“Finding this historic mine demonstrates NATO’s capability to find uncharted mines in the Black Sea,” said Royal Navy Commander Justin Hains, Commander of SNMCMG2. “We work hard to practice our skills to ensure safe sea lanes. Identification and disposal of historic ordnance is just part of the mission.”
NATO is liaising with the Romanian authorities with regards to the neutralization or disposal of the mine. Standing NATO Mine Counter Measures Group Two (SNMCMG2) is currently conducting exercises and interoperability training in the Black Sea under the command of Royal Navy Commander Justin Hains. The task group will arrive in Burgas on February 9th, having sailed from Constanta the week previous. The task group consists of the Flag Ship HMS ENTERPRISE (a Royal Navy Survey vessel), TCG AKÇAY (a Turkish Mine Hunter) and ROS Lupu Dinescu (a Romanian Minesweeper).