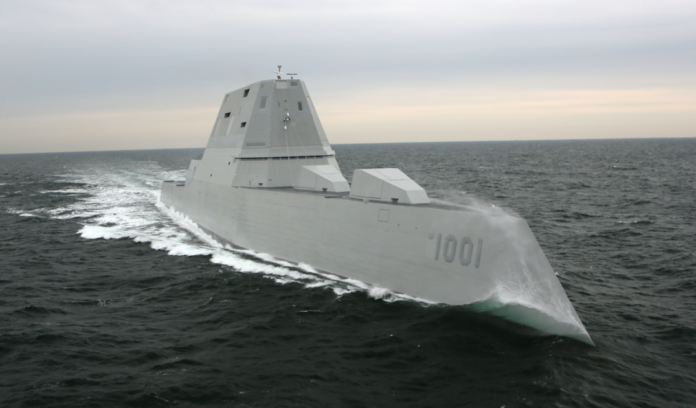 The future USS Michael Monsoor (DDG 1001), the second ship in the Zumwalt-class of destroyers, departed General Dynamics’ Bath Iron Works (BIW) shipyard in Bath, Maine on Nov. 9.
The guided missile destroyer is en route to California where she is so scheduled to be commissioned in Coronado on Jan. 26, 2019, prior to commencing her Post Delivery Availability and Combat Systems Activation.
The departure marks the end of more than eight years of Monsoor under construction at Bath. The ship conducted its builder’s trials in December 2017 and January 2018 and completed its acceptance trials on Feb. 1.
The U.S. Navy accepted the first part of a split delivery of the destroyer on April 24. The destroyer suffered an engine casualty during the acceptance trials that required replacing one of the two Rolls Royce MT30 maritime gas turbines.
Once the ship is in San Diego it will be being the extensive combat system activation process that will test the ship’s sensors and weapons.
The third ship in the class, Lyndon B. Johnson (DDG-1002), is set to deliver to 2020. Combined, the Navy has spent about $23 billion on research, development and acquisition of the three-ship class.