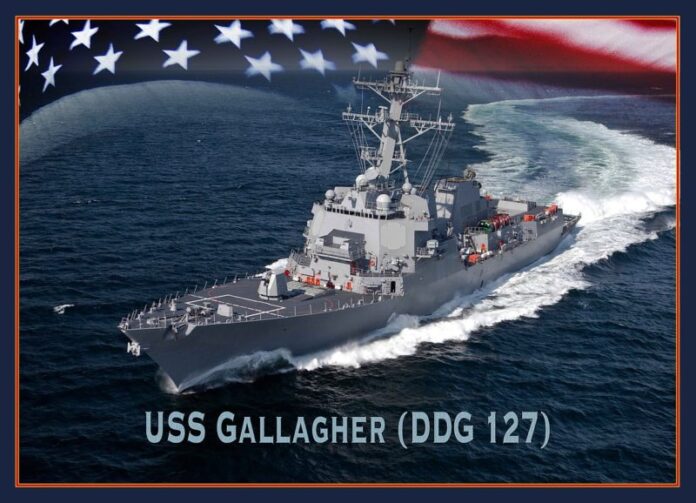 The construction of the future USS Patrick Gallagher (DDG 127) is officially underway at General Dynamics Bath Iron Works (BIW) shipyard.
The milestone was marked with a ceremony held in the shipyard’s fabrication shop during which U.S. Senator Susan Collins made the initial cut to the first plate of steel for the ship. The ceremony was attended by BIW shipyard workers and U.S. Navy representatives.
The ship will honor Lance Cpl. Patrick Gallagher, Marine Corps Vietnam veteran and Navy Cross recipient. Gallagher was awarded the Navy Cross for his actions on July 18, 1966, when he selflessly threw his body on an incoming grenade, shielding his fellow Marines. He quickly pitched the grenade to a nearby river where it safely exploded out of harm’s way, without injury to himself or others. Gallagher was killed in action one year later in DaLoc near De Nang on March 30, 1967. He is one of only 30 known Irish citizens to have died in the Vietnam conflict. “It is exciting to commence construction on what will be the 77th ship of the Arleigh Burke class” said Capt. Casey Moton, DDG 51 class program manager, Program Executive Office (PEO) Ships. “Not only will this ship continue the legacy of enduring warfighting capability, it will carry with it the strength and courage demonstrated by its namesake.” DDG 127 will be the last Flight IIA configuration destroyer built by BIW. The ship will incorporate the AEGIS Baseline 9 Combat System which includes Integrated Air and Missile Defense capability.  This system delivers quick reaction time, high firepower, and increased electronic countermeasures capability for Anti-Air Warfare.
When operational, this multi-mission surface combatant will serve as an integral player in global maritime security, engaging in air, undersea, surface, strike and ballistic missile defense as well as providing increased capabilities in anti-submarine warfare, command and control, and anti-surface warfare.