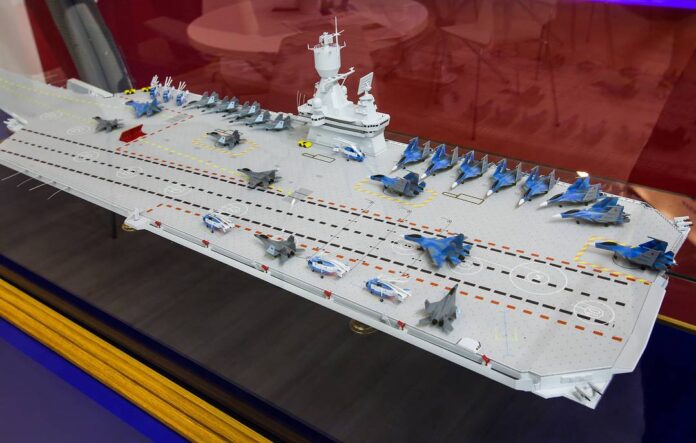 “This year, we will demonstrate a full-fledged aircraft carrier from our viewpoint with a displacement of about 60,000 tonnes and with a very substantial and balanced pool of aircraft,” the Krylov Center’s scientific head said, noting that “this is a fundamentally new solution for the aircraft carrier project.”

The new aircraft features a gas turbine power unit. To a certain extent, it can be compared to the UK’s aircraft carrier Queen Elizabeth. They are about equal by their displacement but the conceptual project of the Krylov Center has an advantage by the number of aircraft, sea endurance and, most importantly, by the number of take-off places.

“This is a full-fledged aircraft carrier but with certain restrictions,” Polovinkin stressed.

The new conceptual Project with the conventional power unit will be an alternative to the current plans of designing a nuclear-powered aircraft carrier from 2023. It will have Russian Saturn made gas turbines.

“Such an aircraft carrier will be four-six times cheaper than its nuclear-powered version,” the Krylov Centre scientific head said.

The Army-2019 military and technical forum is held at the Patriot Congress and Exhibition Center outside Moscow between June 25-30.