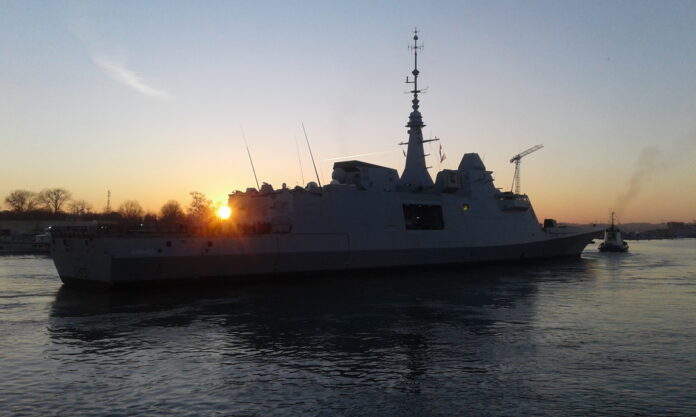 The French Navy celebrated the completion of the construction of its sixth multi-mission frigate, FREMM Normandie, in Lorient on June 25.

The celebration is also a milestone for manufacturing the new version of frigates, the defence and intervention frigate (FDI) which have reinforced air defense and will be the first fully digital warship.

Florence Parly, the French Minister of the Armed Forces was hosted by Chief of Staff of the French Navy and CEO of Naval Group on board Normandie frigate. During the visit on board Minister of Armed Forces and attendants discussed the ongoing and future surface ships programs built in Lorient: FREMM, FDI and aircraft carriers.

This warship was delivered in 40 months, a record time for the whole multi-mission frigates program.

The Normandie has a length of 142 meters and a width of 20 meters. It has a displacement of 6,000 tons and can speed up to 27 knots. It can accommodate 123 persons on board including helicopter detachment.

The frigates are built by international Italian-French program which is managed by the Organisation for Joint Armament Cooperation (OCCAR).

Five frigates, Aquitaine, Provence, Languedoc, Auvergne and Bretagne delivered to French Navy so far. French Navy will have eight units in total. The remaining two frigates, the Alsace and the Lorraine will be delivered in 2021 and 2022.

Moreover, Naval Group teams are already launching the program for defense and intervention frigates (FDI) that will be delivered beginning from 2023. The first steel cut of these ships is expected in October 2019.