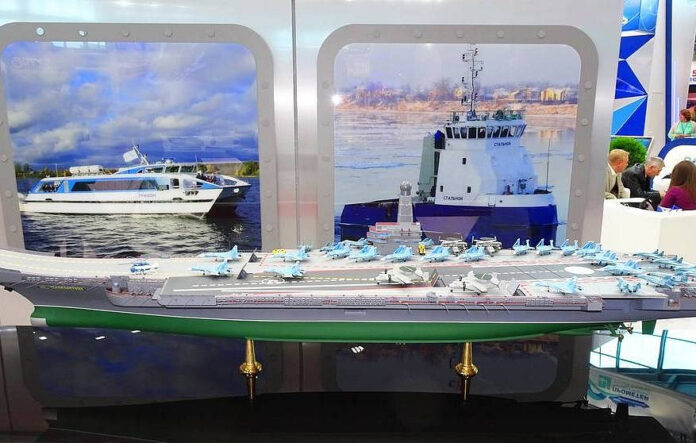 The ‘Lamantin’ aircraft carrier is designated to provide for the deployment and the combat use of an air task force that comprises various types of shipborne aircraft capable of employing weapons and armament against air, sea (submarine and surface) forces, and also land troops and ground installations of an enemy in the oceanic, maritime and coastal waters, and also to ensure naval groups’ combat sustainability and provide cover for amphibious assault troops and their landing force against strikes and attacks by enemy air-launched weapons,” the project’s description says.

According to the materials presented on the Nevskoye Design Bureau’s display stand, the aircraft carrier that will get a nuclear-powered propulsion unit will displace 80,000-90,000 tonnes, feature a maximum length of 350 meters, have sea endurance of about 120 days and will be capable of developing a speed of about 30 knots. The aircraft carrier will have a crew of 2,800 and its air task force will comprise 800 personnel. The carrier will have a service life of over 50 years.