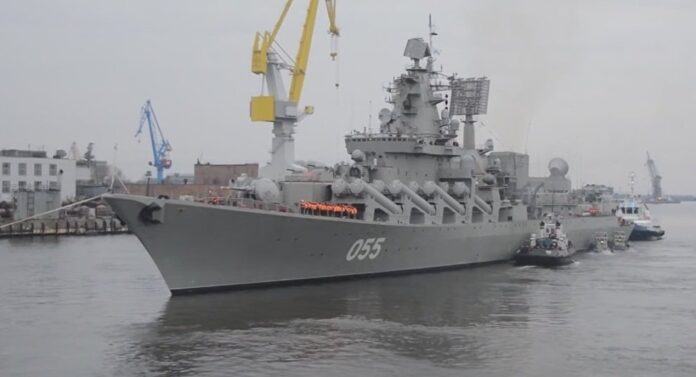 Russian Missile Cruiser, entered the Mediterranean with support vessels together, keeps visiting the Mediterranean Ports. After visiting Algeria and Egypt, two weeks ago, she visited the Aksaz Naval Base of Turkey, which is designated as a NATO base. This visit, seen as a result of rising Turkish-Russian relations, was widely discussed because such a giant cruiser visited a base that is accredited to NATO.

After this visit, she entered Pireaus port of Greece on Tuesday (8th October) according to the spokesman of Russian Northern Fleet. “Traditionally, the Russian sailors’ visit will last three days. The ship’s crew will replenish freshwater and food supplies,” the spokesman stated.

Timing of the Russian Cruiser’s Greek port visit is the most remarkable issue, it happened just after the Defence Agreement  between the U.S. and Greece. With this port visit Russia might intend to give message to Greece that “We have historic relations and don’t forget my contrubition to your independence strrugle against Ottoman Empire”

The port visit of the Russian warship to the Greek port should be considered with the U.S. and Greece Defense

After completing its visit, the missile cruiser will continue accomplishing tasks in the Mediterranean Sea, he clarified.

The missile cruiser Marshal Ustinov left the Northern Fleet’s main naval base of Severomorsk on July 3. Over this period, the warship’s crew took part in Russia’s Main Naval Parade in St. Petersburg on July 28 and in the Russian Navy’s Ocean Shield 2019 large-scale drills. Since it departed Severomorsk, the warship has covered a distance of 16,000 nautical miles.