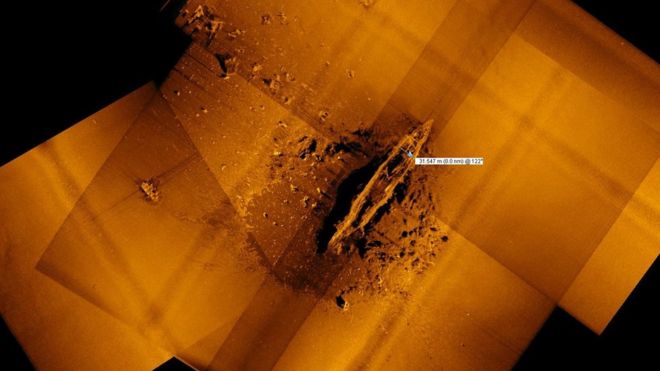 A crew of deep-sea explorers and historians looking for lost World War II warships have found a second Japanese aircraft carrier that went down in the historic Battle of Midway.

Vulcan Inc.’s director of undersea operations Rob Kraft and Naval History and Heritage Command historian Frank Thompson reviewed high frequency sonar images of the warship Sunday and say that its dimensions and location mean it has to be the carrier Akagi.

The Akagi was found in the Papahanaumokuakea Marine National Monument resting in nearly 18,000 feet (5,490 meters) of water more than 1,300 miles (2,090 kilometers) northwest of Pearl Harbor.

The researchers used an autonomous underwater vehicle, or AUV, equipped with sonar to find the ship. The vehicle had been out overnight collecting data, and the image of a warship appeared in the first set of readings Sunday (20th Oct) morning.

The first scan used low-resolution sonar, so the crew sent their AUV back to get higher-quality images.
“I’m sure of what we’re seeing here, the dimensions that we’re able to derive from this image (are) conclusive,” Kraft said. “It can be none other than Akagi.”
The vessel is sitting among a pile of debris and the ground around the warship is clearly disturbed by the impact of it hitting the seafloor. “She’s sitting upright on her keel, we can see the bow, we can see the stern clearly, you can see some of the gun emplacements on there, you can see that some of the flight deck is also torn up and missing so you can actually look right into where the flight deck would be,” said Kraft.

The find comes after the discovery of another Japanese carrier, the Kaga, last week.