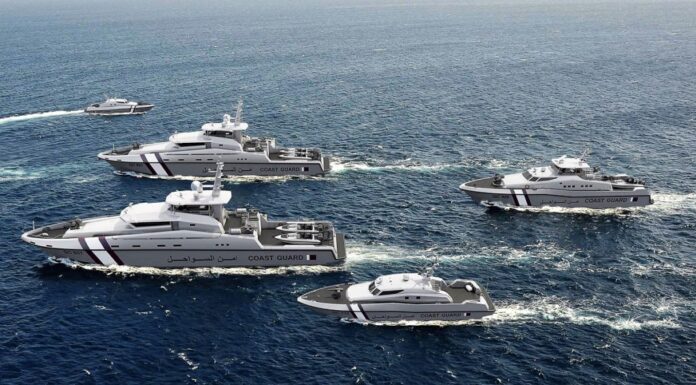 The Qatari Coast Guard’s new main base was officially inaugurated on 14 July, a milestone event in the major expansion in the force’s capabilities.

Prime Minister Abdullah bin Nasser bin Khalifa Al-Thani and commander of US Naval Forces in the Middle East Vice Admiral Jim Malloy attended the ceremony at the Al-Daayen naval base in Semaisima, 30 kilometres (18 miles) from Doha on Qatar’s eastern coast.

The base includes all the advanced requirements for marine security, which will contribute to securing the maritime borders of the State and tightening the security control and protection of all its coasts by conducting maritime patrols.

The coastguard conducts search-and-rescue operations for persons and maritime vessels. It also guards ports, marine, industrial and oil installations in addition to providing security coverage of the waterfront during the conferences, festivals, events and sports activities in the country, the Gulf Times cited the official Qatar news agency as saying.

During DIMDEX 2018, the Qatari Coast Guard has ordered nine additional vessels bringing to 26 the number of ARES Shipyard vessels expected to be operated by the service by 2020. The new ordered consisted in 3x Ares 150 Hercules offshore patrol vessels and 6x Ares 80 SATs for special forces.