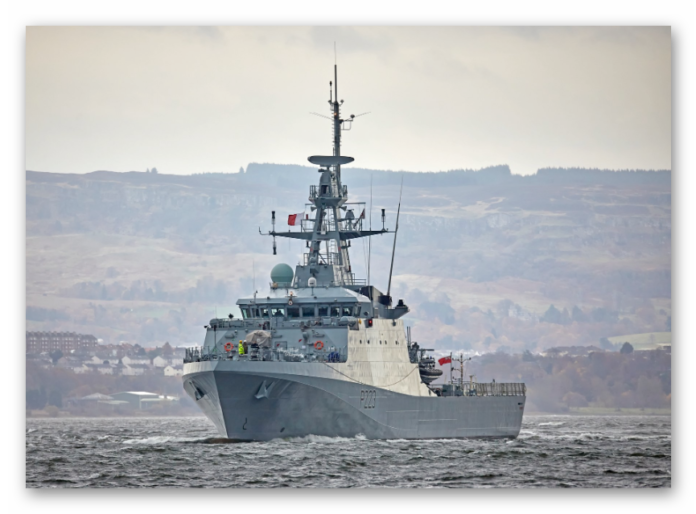 HMS MEDWAY (P223), is the second of five new River-class offshore patrol vessels currently underconstruction for the Royal Navy. She arrived at the port of Portsmouth for the first time on 17 June. The ship is undergoing tests before its commissioning at the Royal Navy (RN) in September.

HMS Medway is a River-class offshore patrol vessel (OPV). Along with her sister vessels, she was designed for counter-piracy, anti-smuggling, fishery protection, border patrol, counter terrorism and maritime defence duties.

The first steel was cut on HMS Medway in June 2015, at a ceremony in Glasgow. HMS Medway was formally named at BAE’s Scotstoun yard on the Clyde by Lady Fallon, wife of Defence Secretary Sir Michael Fallon and sponsor of Medway throughout her active life, on 20 October 2017.

HMS MEDWAY is not equipped with guided missiles or hard weapons, because of high cost and maintenance issues. Main purpose of the ship is to patrol and detect what’s happening at the vicinity of patrol area, and the weapons are enough to detect and prevent piracy and save fishery.

At the first ship of the project, HMS Forth, significant material defects were discovered shortly after it was accepted by the RN. BAE Systems’ reputation was not reinforced by this disaster, and HMS Forth was delayed for more than a year while construction errors were corrected. In this context, good delivery and commissioning of HMS Medway have assumed particular strategic importance for BAE Systems. His determination to do what’s right with Medway was evident to his team, with the workforce in Glasgow investing long hours and a lot of supervision from BAE’s senior engineers. Sea trials were conducted in February and the ship was formally delivered to RN on March 5.

HMS Medway is alongside in her home port for a couple of weeks before sailing for further workup and trials. After the summer leave period, she will then undergo FOST (Flag Officer Sea Training) serials and inspections. FOST staff based in Faslane will focus on seamanship and safety before she goes to Devonport where the emphasis is more on operations, aviation and replenishment at sea. After commissioning into the fleet at a ceremony in Chatham in the Autumn, she is likely to spend some time in UK waters and may conduct fishery protection patrols before being forward-deployed overseas for an extended period.