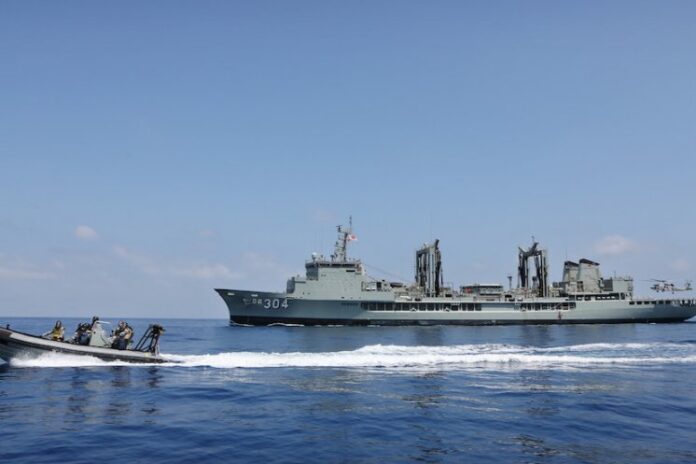 Farewells are emotion loaded days for seamen. Because a ship is not only a ship for them. Because that ship hosted their destiny at least for a period, shared happinesses, sadnesses, excitements in that ship. Ship means lots of memories for them. Because of this issues, farewell days is not easy for seamen who worked on that ships.

HMAS SUCCESS sailed more than a million nautical miles and completed almost 3,500 replenishments at sea around the world. She earned battle honors for her service during the Gulf War in 1991 and East Timor in 1999, and also participated in a record 11 Rim of the Pacific (RIMPAC) exercises and the search for the missing Malaysian Airlines Flight MH370. Despite her age, Success maintained a high tempo right to the end, deploying twice since May last year and returning from a four month overseas deployment just weeks before her service life came to an end.

Chief of Navy Vice Admiral Michael Noonan joined 23rd and final Commanding Officer of HMAS Success, Captain Darren Grogan to pay tribute to the ‘First Lady of the Fleet’ and the 5,000 men and women who served on board.

“HMAS Success has built a proud history and served Australia with distinction by contributing to many of Navy’s most important operations over the past three decades,” Vice Admiral Noonan said.

HMS NEWCASTLE was commissioned in 1993 and has since steamed around 815,000 nautical miles, deployed on operations to the Middle East six times, earned battle honours for her service in East Timor, the Persian Gulf and the Middle East, and conducted peacekeeping operations in the Solomon Islands.

Chief of Navy, Vice Admiral Michael Noonan AO, RAN said the Ship’s Company were honoured to be the last crew to serve in Newcastle and was pleased the occasion could be shared with many former Ship’s Company, who attended the decommissioning ceremony.

“For those who served in Newcastle it was not just their workplace, it was their home away from home and they can look back on their time on board with pride,” Vice Admiral Noonan said.

HMAS Newcastle is set to be replaced by the Hobart class guided missile destroyers, whilst HMAS Success will be replaced by one of two oilers built in Spain.