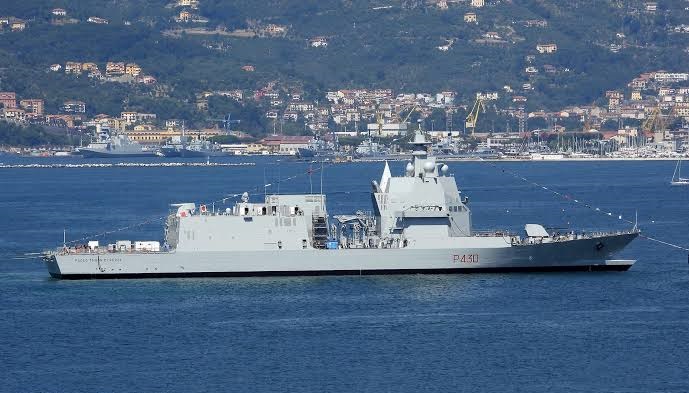 During the trials, various systems / equipment installed on board were successfully configured and tested.

The PPA contract was signed on May 2015; only 4 years and a half have elapsed before the first of class FSG, a worldwide remarkable achievement for OCCAR (Organisation Conjointe de Coopération en matière d’Armement / Organisation for Joint Armament Co-operation) as contracting authority, given the innovative character of this vessel. PPA1 is expected to complete the sea trials in March 2021 and to be delivered to the Italian Navy in May 2021.

The first four ships (seven under current contract) are currently in production. The second, also from the Light configuration, will be named “Francesco Morosini” and will be launched in March 2020.

The Paolo Thaon di Revel class (also known as PPA for “Pattugliatore Polivalente d’Altura”) is a class of multipurpose offshore ships built by Fincantieri for the Italian Navy. It is planned to replace four Soldati class light patrol frigates and eight Minerva class corvettes between 2021/2035. As part of the 2014 Naval Law, a total of sixteen ships are planned and as of 2019 seven vessels have been financed with three more on option.

The class, designed with a high level of modularity and automation, will be delivered in a full, a light+ and a light configuration in terms of different sensors and equipments embarked and can perform multiple functions, ranging from patrol with sea rescue capacity to civil protection operations and, in its most highly equipped version, first line fighting vessel.

The 132.5-meter long ship will be crewed by 171 persons and achieve speeds of over 31 knots, according to Fincantieri.

Equipped with a combined diesel and gas turbine plant (CODAG) and an electric propulsion system, the ship will have capacity to provide electricity to land with 2000 kw of power while two modular zones at the stern and at the center of the ship will allow the embarking of various types of containerized operating/logistic/residential/healthcare modules.