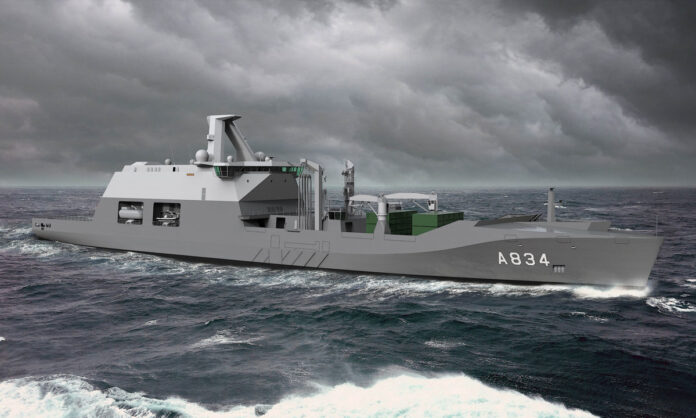 According to the statement of Damen Schelde Naval Shipbuilding (DSNS) on 20th December, Cabinet of the Netherlands’ Government has submitted a so-called D-letter to the Parliament, to begin the construction of the Combat Support Ship Zr.Ms. Den Helder. The D-letter, part of the Defense Materiel Process (DMP), is the conclusive letter announcing the procurement decision for a large military project. With this new ship, the supply capacity of the Royal Netherlands Navy (RNLN) will once again expand to two ships. The construction of this new, essential vessel for the RNLN’s fleet will be undertaken by Damen Schelde Naval Shipbuilding (DSNS).

Director of DSNS Hein van Ameijden is pleased with this move from the cabinet, and awaits the verdict of the Parliament. “De Schelde has been the most important supplier to the Ministry of Defence and the Royal Netherlands Navy for 140 years. Our specialty is in delivering complex naval vessels on time and within budget, always working with a broad chain of Dutch suppliers.” This month marks ten years since the last contract for a large Dutch naval vessel was awarded. Van Ameijden: “Fortunately, we have a healthy export market, so that in the intervening years we were able to maintain the level of expertise in the Netherlands. Together with our Dutch partners we have built ten frigates for international customers. In addition, at this moment we are building a complex ice breaker for the Australian Government. That is why we are now ready and equipped for the upcoming projects for the Royal Netherlands Navy.”

The new Combat Support Ship (CSS) is based on the design of the Joint Support Ship Zr.Ms. Karel Doorman. By taking an existing design as a basis, it is possible to deliver the ship in 2024. The almost 200-meter-long ship will have a 75-person crew and can also take an additional 75 people on board. There is room for several helicopters and around twenty containers. The engineering of the CSS largely takes place in the Netherlands and a large number of components will be delivered by Dutch suppliers. The CSS is built by Damen in Romania, after which the ship’s final components and the combat management system will be installed in Den Helder.

In addition to the Combat Support Ship, DSNS will build the new frigates replacing the M-frigates of both the Belgian and Dutch navies. The yard was also selected last week, together with its Swedish partner Saab Kockums, for the next phase in the replacement programme of the Walrus class submarines.