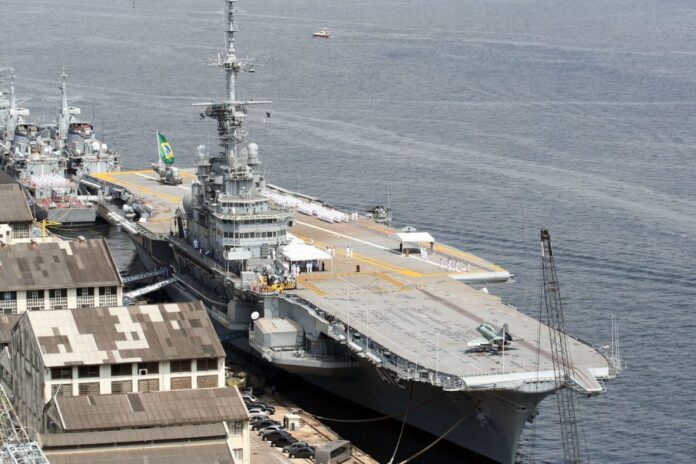 The Brazilian Ministry of Defense has announced on Monday (23rd September) that decomissioned aircraft carrier Sao Paulo is on sale with an opening bid of $1.2 million.

As the largest naval vessel that served with the Brazilian flag, the Sao Paulo aircraft carrier was acquired by the Navy from France in 2000 for $ 12 million. The ship was procured in place of the aircraft carrier Minas Gerais, purchased from the United Kingdom operated for Brazil between 1960 and 2001.

While in service, Sao Paulo was the oldest aircraft carrier in the world. The vessel was launched in 1960 and served with the French navy under the name FS Foch between 1963-2000.

After the procurement by the Brazilian Navy, the vessel had a short and rather troubled career, encountered some mechanical problems and accidents. Because of these incidents, the ship spent more time at shipyard rather than sea. In February 2017 the naval command decided decomission Sao Paulo.

According to data gathered from the Brazilian navy, Sao Paulo spent a total of 206 days at sea, underway for 54,024.6 miles (85,334 km), performed 566 aircraft launch by catapult. The main aircraft operated on the vessel was the AF-1 naval fighter, a national designation for the McDonnell Douglas A-4 Skyhawk, which is being operated from ground bases now.

The Sao Paulo Institute | Foch, formed by a group of Brazilian and French enthusiasts and former military personnel, is one of the biggest interested in acquiring the Sao Paulo aircraft carrier. The purpose of the organization is to transform the vessel into a floating museum.

Honoring the name of the aircraft carrier Sao Paulo (the most populous and richest state in Brazil), the organization’s plan is to transfer the boat to the port of Santos. The auction will be held on September 27th.