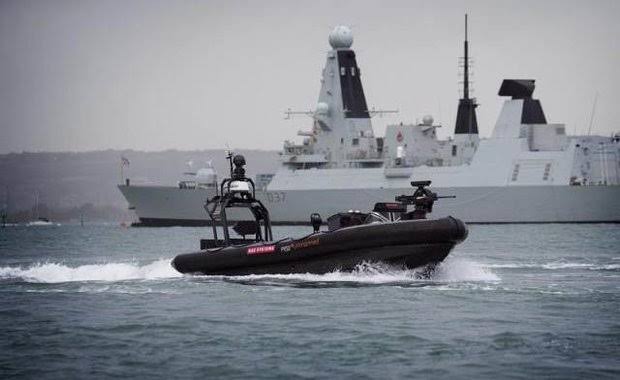 BAE Systems, one of the most succesful companies about unmanned systems, has successfully completed a series of trials on a ‘first of its kind’ autonomous boat that will allow navies to go beyond the limits of human endurance with unmanned vessels that can travel further, for longer and to more inhospitable environments.

This week, they made one step forward with this unmanned boat, Pacific 950. They equipped the boat with machine gun that reloads automatically, and as the world’s first remote-controlled robot war boat, it is tested by military chiefs.

The device allows special forces to launch operations miles away from their target, keeping personnel safe and using the vessel as a decoy.

Experts say this type of vessel can be operated in groups to simulate an attack, while Special Boat (SBS) soldiers launch attacks elsewhere.

BAE Systems Pacific 950 can stay at sea for up to 10 days and is armed with a machine gun that automatically reloads.

An SBS Reserve Officer said: “Imagine four or five of these mannequin boats aboard to look like they’re manned and send them to the enemy. As they will be under attack, they will be returning their main attacking force to other places along the coast and you totally exclude the risk of using people on this mission, reducing the number of people killed or injured, increasing maritime operations. ”

Equipped with weapons, it would be ideal to be employed in the Gulf where the Royal Navy has few ships, they could be used to assist in escorting British merchant ships.

BAE’s drone boat will be unveiled at a military show in London next month.

To read the previous article about Pacific 950, click here.