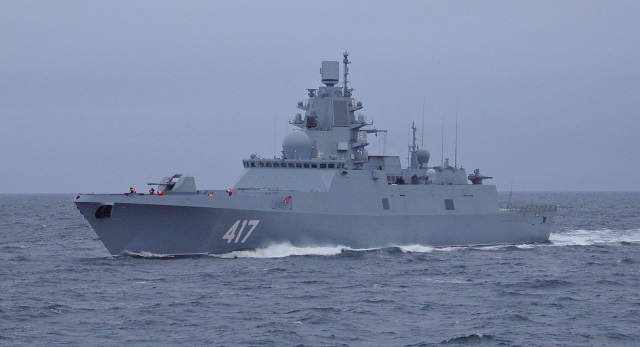 The crew of the Russian Northern Fleet’s frigate Admiral Gorshkov held an anti-submarine warfare exercise in the Atlantic as part of its voyage in distant waters, the Fleet’s press office reported on 12nd July.

“The exercise was held in the areas of the Atlantic Ocean north of the Canary Islands,” the press office reported.

During the drills, the frigate’s crew practiced a set of measures to search for a notional enemy’s submarines using onboard sonars and also employing its deck-based aviation, namely, a Ka-27 anti-submarine warfare helicopter.

During the flight, the Ka-27 crew carried out search measures, using a dipping sonar system. At some stages of the drills, the combat teams of the frigate’s torpedo compartment held drills to notionally force an adverse submarine to surface and also to notionally employ the entire range of the anti-submarine warfare armament.

The Northern Fleet’s naval task force comprising several warships and vessels set off for its long-distance mission from the Severomorsk naval base on February 26. This voyage is the first for the frigate Admiral Gorshkov in its history. During the voyage, the Northern Fleet’s warships covered more than 32,500 nautical miles and made business calls at the ports of Djibouti, Sri Lanka, China, Ecuador, Cuba, Trinidad and Tobago and Cape Verde, sailed through the Suez and Panama Canals and crossed the equator in the eastern Pacific and the central Atlantic.