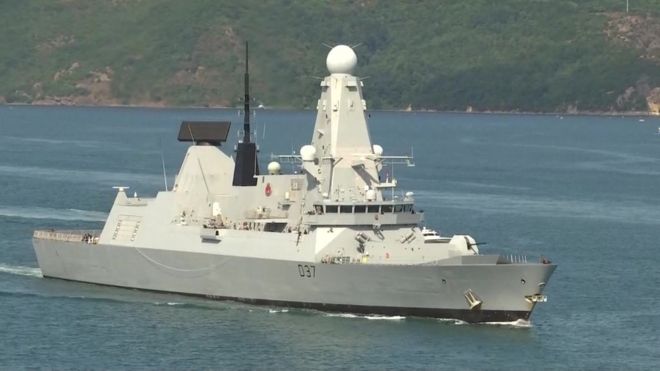 Tension between Iran and UK is not being reduced. After seizure of Iranian oil tanker by Gibraltar, Iran dared to board British tanker at Hormuz according to rumours. However this issue was denied by Revolutionary Guards of Iran. After the seizure attempt, UK Royal Navy made a new movement, dispatched the guided-missile destroyer HMS Duncan to join the frigate HMS Montrose in the Persian Gulf amid heightened tensions in the region.

The United Kingdom says it does not want to increase tension with the Iranian government but acknowledges that it holds talks with Washington on strengthening the military presence in the Persian Gulf.

HMS Duncan left Portsmouth Naval Base in March for a six-month overseas deployment, mostly focused in the Mediterranean Sea.

The Type 45 destroyer “is deploying to the region to ensure we maintain a continuous maritime security presence while HMS Montrose comes off task for pre-planned maintenance and crew change over,” a U.K. government spokesperson said on Friday, July 12.

Montrose, a Type 23 frigate, is stationed in Bahrain until 2022 to spare other British warships the trip to and from the United Kingdom and ensure a permanent presence in the region.

Duncan’s rotation has been moved forward by a number of days, AFP reported a U.K. government source as saying.

The two ships will temporarily patrol together in the Gulf.