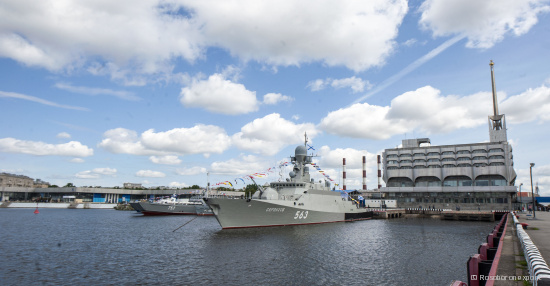 The military attache from Nigeria, the delegations of the UAE, Saudi and Vietnamese navies and the armed forces of Namibia, Ghana, Thailand and other countries viewed the exposition at the St. Petersburg naval show, the press office said.

The visitors of the St. Petersburg naval show could also view the Project 21631 small missile ship, the Project 21980 special-purpose boat and the Project 22160 patrol vessel built by the Zelenodolsk Shipyard, the statement said.

Project 22800 Karakurt-class missile corvettes are a Russian series of green-water multipurpose missile/artillery warships. The corvettes of this class developed by specialists of the St. Petersburg-based Almaz Central Design Bureau for Marine Engineering displace about 800 tonnes and develop a speed of over 30 knots.

Karakurt-class corvettes are armed with Kalibr or Oniks missiles, and also with the modernized AK-176MA 76.2mm artillery system. The corvettes’ endurance is 15 days.

Overall, the shipbuilders are planning to build 18 warships of this Project for the Russian Navy.

The Project 11661 Gepard-3.9 frigate is designated to carry out patrol missions and protect state maritime borders and exclusive economic zones, support maritime operations and be present in the areas of national interest.

The Project 11661 frigate has a displacement of 1,500 tonnes. It is equipped with artillery guns, anti-ship, air defense and anti-submarine warfare weapons.

The ninth International Maritime Defense Show runs at the Lenexpo Exhibition Center in St. Petersburg on July 10-14. The naval show has been organized by the Industry and Trade Ministry with the support of the Defense Ministry, the Foreign Ministry, the Federal Service for Military and Technical Cooperation, the state arms exporter Rosoboronexport and the St. Petersburg government. A total of 353 companies, including 28 foreign firms from 19 countries are taking part in the naval show.