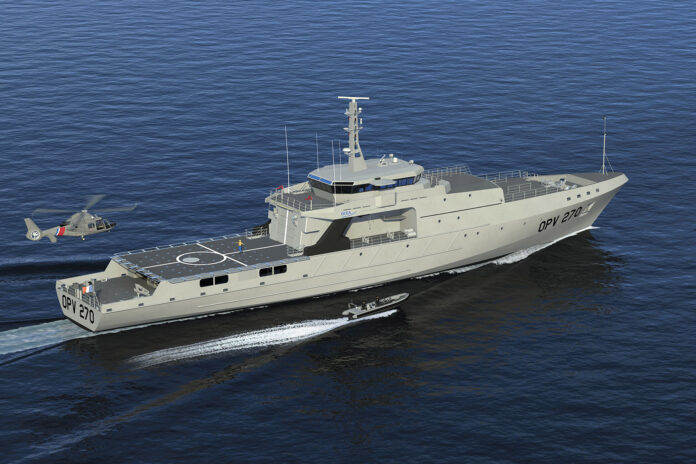 The OPV 270 is the largest ship built in Sables-d’Olonne, it is also the largest aluminum OPV built in the world. The ship, crafted for long-distance missions on the high seas, is the centerpiece of a major five-ship contract with the Philippine Coast Guard.

The design of an aluminum vessel of this length is a world first and the shipyard is proud to lead the site to Les Sables-d’Olonne.

At the announcement of this project, Océa had explained that this choice by the Philippine authorities was partly due the competitive acquisition cost and the operational cost of the boats is much lower than that of a steel vessel.

But the main argument of this contract is above all the reduction of the environmental impact .

Since then, the shipyard has communicated little about the construction of this patrol boat on the high seas. But it is clear that the ship, now narrow in its hangar of the Cabaude, sharpens curiosity. With an autonomy of up to five weeks, the OPV can operate a 5-ton class helicopter and deploy two RHIBs 9.2 meters in length. The ship is scheduled to be delivered to the Philippines Coast Guard by the end of the year.