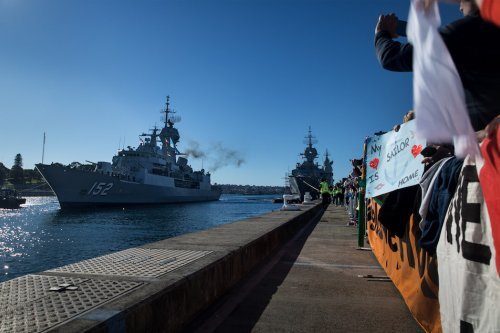 More than a thousand people have lined the wharf at Garden Island, Sydney to welcome HMAS Warramunga back to her homeport after a nine-month deployment.
The new Chief of Navy Australia, Vice Admiral Mike Noonan joined Minister for Defence, the Honourable Marise Payne to congratulate the ship’s company on a record breaking deployment.
While deployed, Warramunga made a significant impact on terrorist and criminal organisations by denying them approximately AUD$2.17 billion in funding from illegal narcotics. The Anzac Class frigate seized around 31.8 tonnes of hashish and two tonnes of heroin while deployed on Operation MANITOU.
Warramunga maintained a high tempo during the deployment. The Anzac Class Frigate travelled 43,995.9 nautical miles, operated with 27 international ships and conducted 12 port visits
Commanding Officer, Commander Luke Ryan said the ship also conducted a number of flag verification boardings and air sorties. “Warramunga conducted 31 flag verification boardings, 19 escort taskings and 15 replenishments at sea,” he said. “The MH-60R flew 182 sorties and spent almost 520 hours in the sky.” “This deployment has been busy for all the men and women in Warramunga. Their commitment and dedication has made the mission a success,” Commander Ryan said.
Warramunga sailed with a ship’s company of 190 in October 2017 and spent Christmas at sea patrolling the waters of the Middle East.
This was Warramunga’s third deployment to the Middle East Region and the 66th rotation of a Royal Australian Navy Fleet Unit to the region since late 1990.