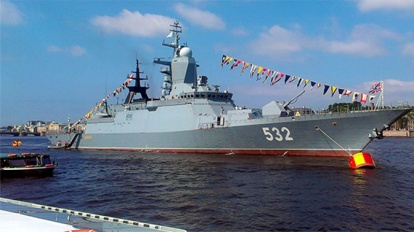 Russian Navy Baltic Fleet ship, “Boykiy”, arrived in Leningrad naval base in Kronstadt to participate in the Main Naval Parade,  which will be held on Navy Day, July 29. She arrived Kronstadt after completing the tasks in the North Atlantic
In total, more than 40 ships will take part in the naval parade on Navy Day.
Earlier “Ivan Gren” and “Korolev” came to Kronstadt to participate in the parade from the Baltic Fleet .