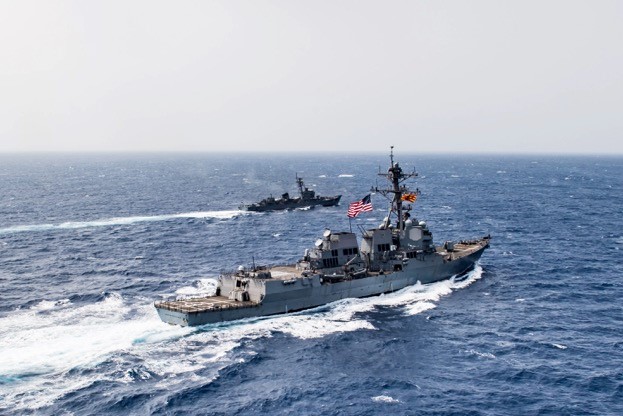 The U.S. Navy guided-missile destroyer USS Jason Dunham (DDG 109) and the Egyptian Navy frigate El Zafer (F951) conducted a passing exercise (PASSEX), July 1.
PASSEX is an exercise in which multiple ships, operating in close vicinity, practice evolutions together to improve crews’ knowledge, navigation and familiarity with operability.
The PASSEX commenced with Dunham and El Zafer performing divisional tactics and maneuvers.
The exercise concluded with a gunnery exercise. A floating smoke target was dropped for the ships to fire upon, and Dunham shot five rounds from the ship’s 5-inch gun, followed by 20 rounds from El Zafer’s 37mm machine gun.
Dunham is deployed to the U.S. 5th Fleet area of operations in support of naval operations to ensure maritime stability and security in the Central region, connecting the Mediterranean and the Pacific through the western Indian Ocean and three strategic choke points.