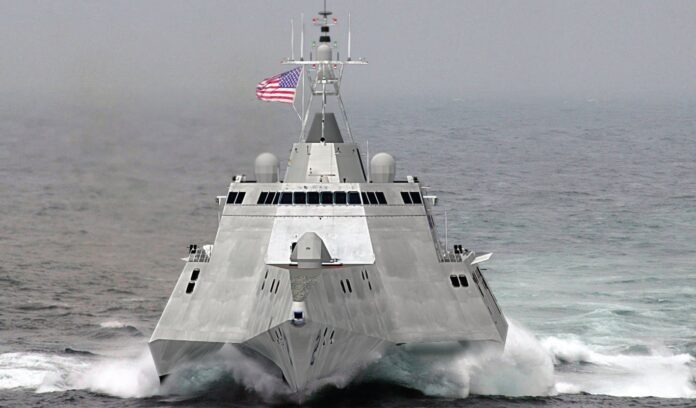 The littoral combat ship USS Tulsa (LCS 16) was commissioned as the US Navy’s newest surface combatant in a ceremony in San Francisco Feb. 16.

The Independence-variant LCS is the Navy’s second ship to be named for the city of Tulsa, Oklahoma.

Assistant Secretary of the US Navy James Guertz noted Tulsa is the fifth ship the Navy has commissioned in the past 50 days and one of 13 ships slated to be commissioned this year – up from eight a year ago – as part of broader efforts to ensure the nation’s maritime freedom.

After the ceremony, the ship will transit to San Diego to join Littoral Combat Ship Squadron 1 and eight other littoral combat ships currently homeported at Naval Base San Diego.

Tulsa is the 15th littoral combat ship and the eighth of the Independence variant.

In a matter of hours, the reconfigurable mission bay of an LCS can plug-and-play a variety of modules, thus allowing it to change its primary function to fit a particular Navy operation. The crew has the ability to deploy and control unmanned surface vessels and mine sweepers that locate and destroy a variety of mines.

The LCS 16 – USS Tulsa –draft only 14 feet. Its four turbines, two diesel and two gas-powered, push the 418-foot-long trimaran to a top speed of 54 mph and the ship boasts a 4,900 mile range. A potent arsenal of 24 radar-guided Hellfire missiles provide standoff firepower to defend against swarming fast attack craft. An over the horizon, longer-range missile is scheduled to be a part of the LCS surface warfare package that will be fired from a hatch on the bow’s deck.