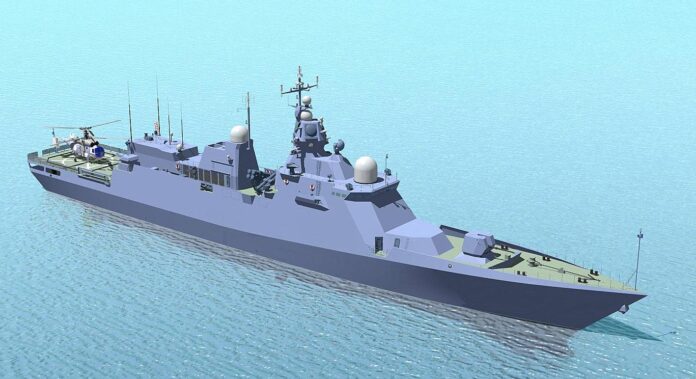 Relationships between Turkey and Ukraine has been growing for recent years. At President level, they made courtesy calls and during the visits, many negotiations have been completed such as the purchase of Turkish-made “Bayraktar UAVs”. During the “Weapons and Security-2019” exhibition, new improvements and cooperation fields are seriously discussed by the representatives of the Ministry of Defense of Ukraine with their Turkish counterparts.

The new issue discussed at the exhibition is to give a hand to build the project 58250 corvettes (Volodymyr the Great).

Development of Weapons and Military Equipment of the Ministry of Defense of Ukraine has stated key issues about the intentions for the project.

“Today we have a project that provides for a significant amount of foreign production, including armaments. And not all foreign suppliers are ready to return to the implementation of this project because of irregular financing or on unfavorable terms for us.” said Vladislav Shostak, Chief of the VTP Department of the Ukraine MoD.

According to the officer, Turkey and the United States are ready to submit proposals to equip the ship with appropriate weapons, survivability, engines and more. The Turkish side also expressed its readiness to build the main ship for Ukraine, and in the future – the corvettes for its own armed forces under this project.

It is considered very important that the necessary decisions must be made regarding the corvette program and its restoration in accordance with the instruction of the President of Ukraine Volodymyr Zelensky. And the first thing to do is to determine the main contractor, because the PJSC “Black Sea Shipyard”, where the unfinished hull of the first Ukrainian corvette is currently located, was put up for sale by the decision of the Economic Court of the Mykolaiv region. So, there is now a search for another company to guarantee that the ship will continue to be built to contract with him.

It should not be forgotten that the corvette can be completed only with the proper financing of the program from the budget of the Ukraine MoD, which is UAH 2 billion (appx $82 million) annually.

Reaction is : “Russia is wondered”

Turkey’s answer to Ukraine probably would be considered by Russia closely. Because relationships and cooperation between Turkey and Russia maybe at top level nowadays, so much that Turkey purchased the S-400 air defense system in spite of the objections of the United States. Russia’s reaction is an issue to be wondered because they have a serious conflict with Ukraine.

Turkey is pursuing a delicate balance between Russia and Ukraine. Russia has absolute sea control over the Azov Sea due to lack of Ukrainian Naval Force. Any attempt to strengthen the naval power of Ukraine is a direct threat for the Russian Naval strategy. Because of this reason, Turkey is at the edge for keeping a sensitive balance at the region.

The program to build four Project 58250 class corvettes by 2021 was initially signed off in late 2011. In the wake of Russia’s invasion in Crimea and the subsequent war in Donbas, the program was put on hold for the sake of saving funds for ground forces opposing Russian proxies in the country’s east.

By 2017, the class’ lead ship Volodymyr the Great was ready only by 17 percent, mostly in terms of the vessel’s hull, and the building was expected to be completed only by 2028.

In July 2019, then-Minister of Defense Stepan Poltorak stated that the corvette was 32 percent complete, although as much as Hr 2.2 billion funding were still required for the program.

According to Ukraine’s naval development strategy published in early 2019, new Ukrainian corvettes are to take the lead of a “mosquito fleet” of smaller, highly-maneuvrable vessels, mostly missile boats expected to be built by 2035.