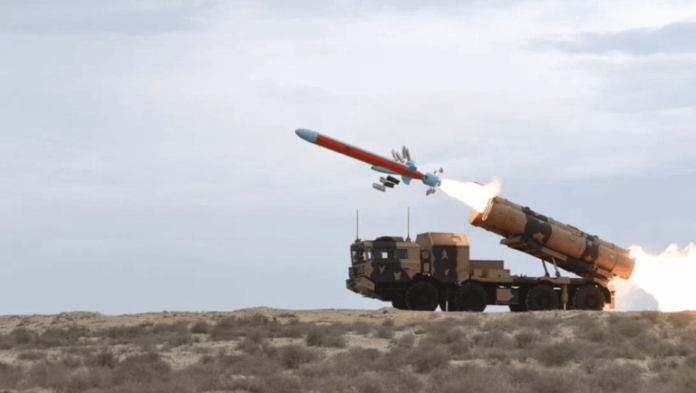 According to the press release of Pakistan Navy Public Affairs, Pakistan Navy test fired land based anti-ship missile ‘Zarb’ on Tuesday (5th Nov) as part of a training exercise from the coastal region. The missile successfully followed its preplanned trajectory and accurately engaged the target at sea. Chief of the Naval Staff, Admiral Zafar Mahmood Abbasi witnessed the exercise as Chief Guest.

The missile successfully followed its preplanned trajectory and accurately engaged the target at sea.

After the drills, Admiral Mahmood expressed that Pakistan’s pursuit for peace and stability has to be taken in the context of our quest for maintaining a peaceful coexistence in the region and not to be construed as our weakness. Pakistan Navy, being a professionally competent and potent force, is fully capable of thwarting any aggression with an iron fist.

He further said that operationalization of Zarb Weapon System is depictive of Pakistan’s strong resolve and high level of preparedness. He reaffirmed the resolve that Pakistan Navy’s personnel remain vigilant and combat-ready to guard the sea frontiers and maritime interests of our motherland.

Zarb is evidently derived from the C-802, the upgraded export version of the Chinese YJ-8 AShM. The Pakistan Navy operates some 70 C-802s. The weapon is the main missile armament aboard the navy’s F-22P Zulfiquar class frigates and Jalalat II class fast attack craft. The C-802 carries a 165 kg time-delayed semi-armor-piercing, high-explosive warhead out to some 200 km at a speed of Mach 0.9 (1,100 km/h).

The word “Zarb” in urdu means a blow; in cricket it is a stroke in which the sole of the bat hits the ground and drives the ball aloft.