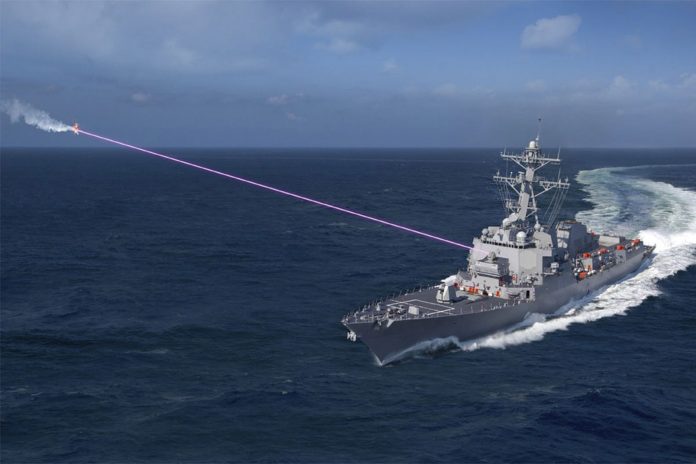 ODIN’s development, testing and production was done by Navy subject matter experts at Naval Surface Warfare Center (NSWC) Dahlgren Division in support of Program Executive Office Integrated Warfare Systems. Their work on the laser weapon system known as LaWS, positioned them to be designated as the design and production agent for ODIN.

During his recent visit on USS Dewey, Mr. James F. Geurts, assistant secretary of the Navy for research development and acquisition (ASN (RDA)) was impressed with the rapid progress made by the team. Geurts stated, “This is a great example of our organic talent at the warfare centers all working together with ship’s company to deliver a system which will provide game-changing capability. Bravo Zulu to the entire ODIN team on being mission-focused and delivering lethal capability to the warfighter.”

Going from an approved idea to installation in two and a half years, ODIN’s install on Dewey will be the first operational employment of the stand-alone system that functions as a dazzler. The system allows the Navy to rapidly deploy an important, new capability to the Navy’s surface force in combating UAS threats.

UAS production and employment has increased significantly, and ODIN was developed to counter these threats.

“The Pacific Fleet Commander identified this urgent Counter-Intelligence, Surveillance, and Reconnaissance need and the Chief of Naval Operations directed us to fill it as quickly as possible,” said Cmdr. David Wolfe, Program Executive Office Integrated Warfare Systems Directed Energy office. “The NSWC Dahlgren Division team did an amazing job addressing challenges and keeping our accelerated schedule on track and moving forward to deliver this capability.”

Within the next couple of years, the ODIN program will have all units operational within the fleet providing a safer and more technically advanced capability to the US Navy. Lessons learned from ODIN’s installation on Dewey will inform installation on future vessels and further development and implementation of Surface Navy Laser Weapon Systems.