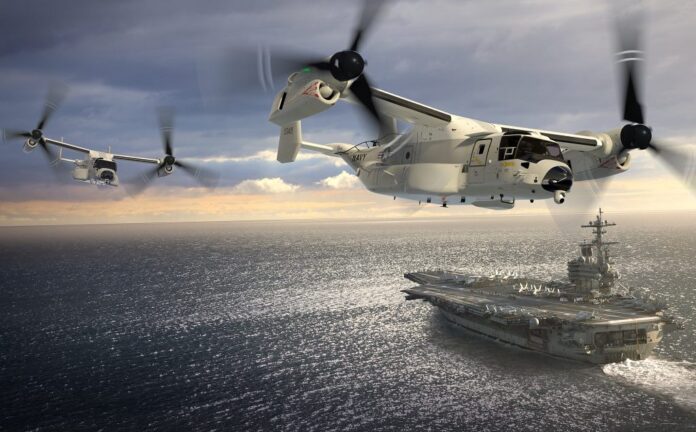 The U.S. Navy bought its first CMV-22 Ospreys for use as carrier onboard delivery aircraft as part of a $4.2 billion contract modification announced by the Pentagon last week.

For the Navy, these are the first Osprey’s purchased specifically to replace its fleet of 27C-2A Greyhound turbo-prop aircraft. Since the 1960s, the C-2s have served as the U.S.Navy’s COD vehicle. The Navy first announced plans to consider the Osprey as a Greyhound replacement in 2015.

The current modification follows a 2016 $151 million contract awarded to Bell-Boeing to complete the engineering work needed to adapt the V-22 to operate as the COD. Those modifications included an extended-range fuel tank and a high-frequency beyond-line-of-sight radio.

The U.S. Navy anticipates the Osprey COD program achieving initial operating capability in 2021, and fielding them to the fleet by the mid-2020s. In less than a decade, supplies, mail, aircraft engines and visitors will no longer experience the explosive sensation of being on a roller coaster in reverse as the Greyhound’s tailhook catches an arresting wire. Instead, the relatively delicate landing of an Osprey tiltrotor aircraft touching down on a pitching flight deck will become the norm. Introduction of the Osprey will also change how the carrier strike group uses the COD.