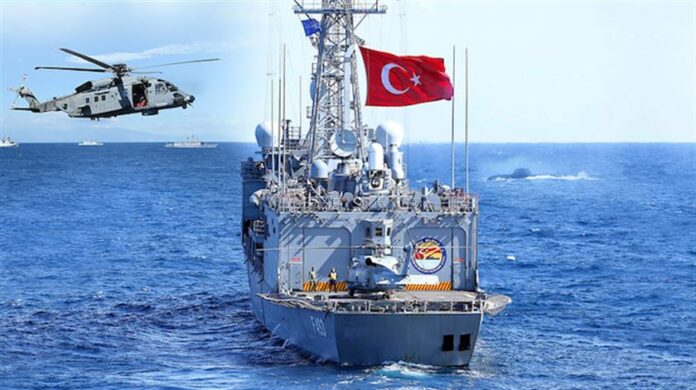 Amid the conflicts over the east Mediterranean, Turkey-hosted multinational invitation exercise (INVITEX) “Dogu Akdeniz-2019” has commenced at Aksaz Naval Base on 9th November. 47 naval assets and 4700 crew from 15 countries are participating in the exercise. The exercise is being conducted in East Mediterranean and will last until 20th November. This will be the 22nd edition of the exercise.

Within the scope of the exercise, a pre-sail briefing was held on board of the Turkish Amphibious Assault Ship TCG SANCAKTAR, with the attendance of press and the commanding officers of participating units. Rear Admiral Yanki Bagcioglu, Head of Operational Division of Turkish Navy and Director of the Exercise stated about importance and aims of the exercise during the briefing. Commander of Turkish Fleet Vice Admiral Ercument Tatlioglu, Commander of SNMG-2 Commodore Josee Kurtz and Commander of SNMCMG-2 Captain Alessandro Falcone also attended the pre-sail briefing.

“The aim of the exercise is to improve interoperability between friendly and allied countries and to ensure training of the Turkish High Preparedness Navy Headquarters, which has been declared to NATO. The exercise will be carried out with the wide participation of NATO elements, friendly and allied countries and public institutions and organizations. This year’s exercise will be the highest participation level of the Eastern Mediterranean Drills so far.” said Bagcioglu. He also stated that with the aim of simulating the exercise very close to reality, an internet-based press channel named “INT TV” will be broadcasting on internet in accordance with the scenario of the exercise.

“In addition to NATO elements, 3 frigates from 11 friendly and allied countries, 2 maritime patrol aircraft, a naval special force team, a boarding team and 29 observer officers and 5 staff officers will participate in the exercise.” Bagcioglu added.

The exercise will be controlled and managed by the Turkish Naval Exercise center and 170 crew will work for 24 hours at the center.

Is Turkey’s role in NATO should be questioned?

Because of getting closer relationships with Russia, especially after purchasing S-400 air defence system, there’s a rising reaction against Turkey by the European countries including NATO members. Though Stoltenberg strongly stated that Turkey is an indispensable part of NATO, some of the allied countries put the membership of Turkey to NATO on the table and requested to discuss Turkey’s role in NATO unofficially.

In the shadow of these debates, participation in the exercise is truly remarkable. Though Dogu Akdeniz is a Turkish-led annual INVITEX, which is held with the attendance of some countries every year, participation for this year is really huge. This attendance could be seen as an answer to countries that want Turkey to leave NATO, though there are some conflicts on some issues partnership between Turkey and NATO is quite sturdy.

TURMARFOR : Does Turkey want a bigger maritime role in NATO?

In the amid of the discussions over Turkish Army Role in the NATO, Turkish Navy is planning to have another milestone capability, TURMARFOR. TURMARFOR is the abbreviation of “Turkey Maritime Force” which means the capability of command and control major NATO operations on behalf of the NATO.

NATO has such headquarters of “high readiness” maritime forces established in some allied countries, like UKMARFOR (United Kingdom), SPANISHMARFOR (Spain), ITMARFOR (Italy), FRMARFOR (France), STRIKEFORNATO. Now Turkey claims that they have enough capacity to hold such operations for NATO and requires a more important role in the partnership.

TURMARFOR is declared to NATO by Turkey and will be organized and worked during this multinational exercise in order to see the efficiency of the force and C2 capabilities.