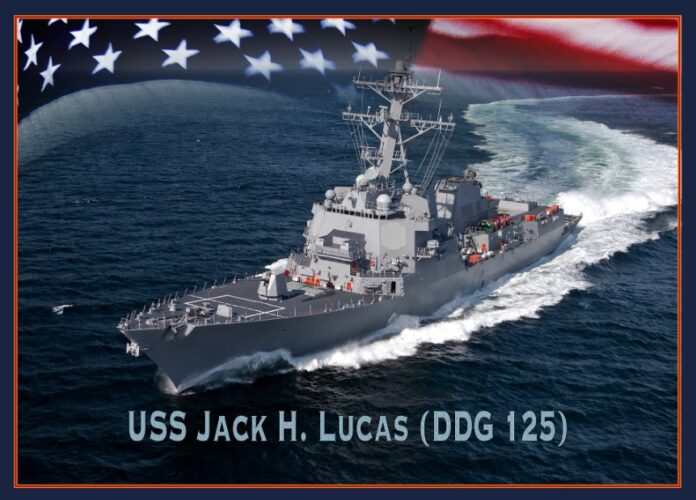 The future USS Jack H. Lucas, which may be based in San Diego, is the 75th ship in the DDG 51 program.

DDG 125 will be the first Arleigh Burke class destroyer built in the Flight III configuration with improved capability and capacity to perform anti-air warfare and ballistic missile defense in support of the integrated air and missile defense mission. The ship will have an upgraded Aegis fire-control radar and computer system.

Commissioning for the USS Jack H. Lucas is set to take place in 2023.

“This destroyer was named after an American hero, Medal of Honor recipient Jack Lucas, and I am humbled and honored to be here today as we authenticate the keel on his namesake ship,” said Capt. Seth Miller, DDG 51 program manager.

“The Flight III ships will bring increased lethality and warfighting capacity to our warfighters, and today’s milestone is the first of many to come as we work to deliver this highly capable ship to the fleet,” he added.

The Flight III destroyers will be armed with 92 long-range missiles in vertical-launch tubes, two anti-submarine helicopters, a 5-inch deck gun, a Phalanx anti-aircraft canon, and a variety of smaller guns. With a displacement of over 9,000 tons, they are as large as World War II-era cruisers.