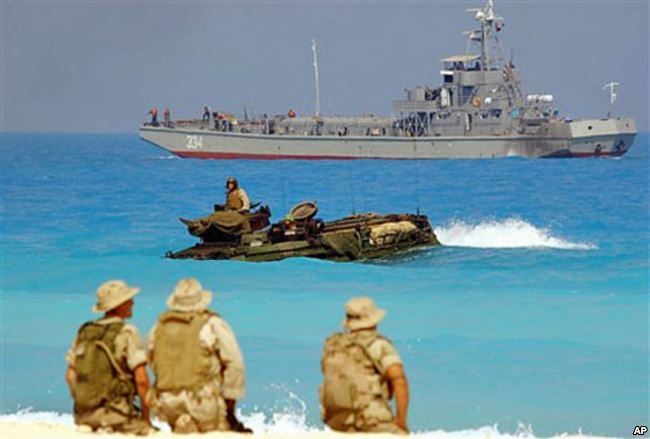 The exercises are scheduled to take place from 8 to 20 September at the Mohamed Naguib Base, west of Alexandria, and in designated areas of the Mediterranean.
Land, naval and air forces from Egypt, the US, Greece, Jordan, the UK, Saudi Arabia, the UAE, Italy and France will take part in the drills.
Lebanon, Rwanda, Iraq, Pakistan, India, Kenya, Tanzania, Uganda, the Democratic Republic of Congo, Chad, Djibouti, Mali, South Africa, Niger, Senegal and Canada have been invited to attend as observers. That India and Pakistan will attend together is in itself remarkable.
Such a large array of participants makes this year’s manoeuvres the largest in the history of the Bright Star operations which began in the early 1980s.
According to the ‘Egyptian Armed Forces’  the Bright Star 2018 manoeuvres will promote the exchange of expertise and interoperability among participant forces, hone their skills, develop operational and training methods in counter-terrorism and non-conventional warfare, furnish training in administrative support processes, medical evacuation, anti-mining operations and the latest methods of countering threats to maritime security, and develop expertise in planning and implementing joint aerial operations.
Bright Star 2018 is the 14th in the series of training operations which began in 1981. The series has twice been interrupted, first in 1991, when participant nations were engaged in the liberation of Kuwait, and later as a result of the Arab Spring uprisings consequent conflicts in Libya, Syria, Yemen and Iraq.