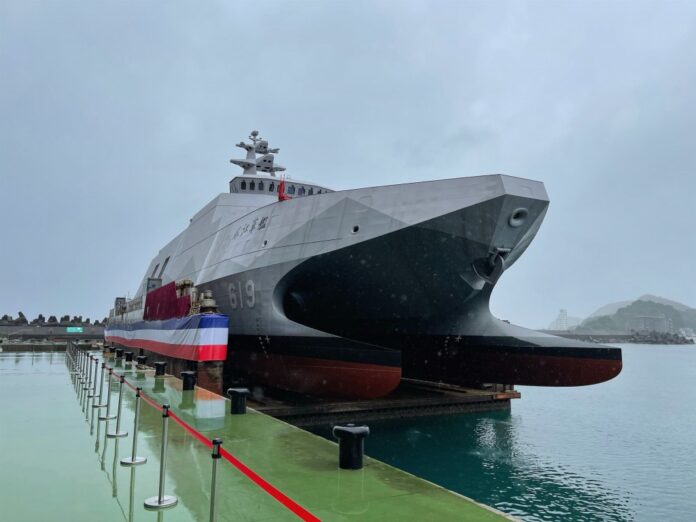 President of Taiwan, Tsai Ing-wen, Minister of Defence and Chief of the Taiwanese Navy attended the launch ceremony.

The name of the new ship is Ta Chiang, which is derived from the Tawa River in Taitung County. The river basin is home to the Paiwan Indigenous people, who have hunted in the area since ancient times and are known for their fearlessness and bravery in war, according to the Navy Command.

The first Tuo Chiang-class ship will officially be delivered to the Navy in July 2021.

The addition of this ship can be used in conjunction with the battlefield environment, making tactical planning more flexible, becoming a sea fortress in my country and guarding the borders of the Republic of China.

Tuo Chiang is the first guided-missile corvette built indigenously in Taiwan. Though there are similarities the Anping-class offshore patrol vessel, the first of which was launched by the Coast Guard Administration on Friday (Dec. 11), the Tuo Chiang version is much more heavily armed, as it is designed for combat.

The ships are built by the Kaohsiung-based Jong Shyn Shipbuilding Group, feature a modern catamaran design, which provides better stability, manoeuvrability, less draft, greater speed, and superior fuel efficiency. The Tuo Chiang-class corvettes have a length of 60.4 meters, displacement of 685 tons, a maximum operational range of 1,800 miles, and a top speed of 43 knots, according to Lungteh Shipbuilding.