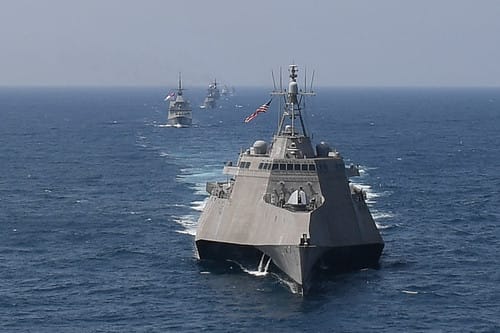 Throughout the exercise, ASEAN member states and U.S. forces operated together under a combined task force structure, training for realistic scenarios designed to reinforce interoperability in areas such as visit, board, search and seizure (VBSS), maritime domain awareness, division tactics and maritime asset tracking.

Commercial vessels, contracted by the United States, served as simulated target vessels during the VBSS portion of the exercise, which focused on countering relevant maritime threats. Teams from multiple countries worked together to board and seize the ships under a variety of realistic scenarios.

Co-led by the U.S. and Royal Thai navies, AUMX included pre-sail activities in Thailand, Singapore and Brunei, followed by a sea phase in international waters in Southeast Asia, including the Gulf of Thailand and South China Sea.

In all, AUMX includes eight warships and four aircraft from seven countries, and more than a thousand personnel representing all ten ASEAN member states and the United States.

AUMX was first proposed at the Association of Southeast Asian Nations Defense Ministers’ Meeting Plus (ADMM-Plus) in 2017 and confirmed during the 12th ADMM in October 2018.