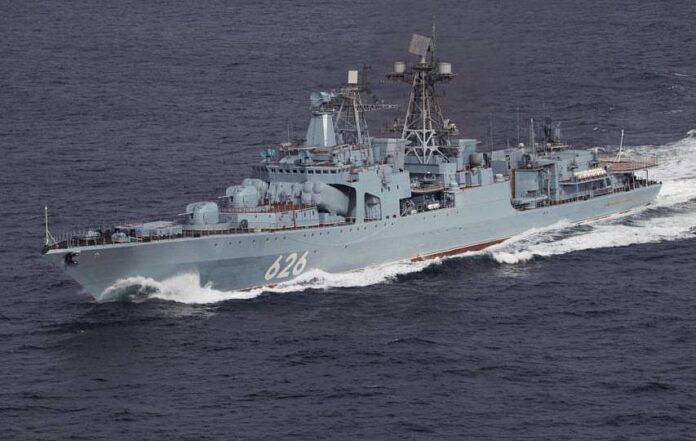 The Northern Fleet’s flotilla that is making a long-distance voyage to the Arctic left the Yenisei Gulf and entered the Kara Sea, the fleet’s press service said in a statement released on Friday (6th August).

“The large anti-submarine ship Vitse-Admiral Kulakov, the large landing ships Kondopoga and Alexander Otrakovsky and the support ships — the tanker Sergei Osipov and the rescue tug Pamir — will continue their route in the north-eastern direction to areas close to the Northern Sea Route, in accordance with the plan of the Arctic voyage,” the press service reported.

After leaving the Yenisei Gulf, the crew of the large anti-submarine ship Vitse-Admiral Kulakov and the crew of the border guard ship Polyarnaya Zvezda carried out a number of tasks on monitoring and control over the use of bioresources in the specified areas of the Kara Sea near the Taymyr shore. For this purpose, a Ka-27 helicopter took off from this ship and flew along the planned route.

The large anti-submarine ship Vitse-Admiral Kulakov heads the Northern Fleet’s unit that set off for a new Arctic voyage on August 5 from Severomorsk.

The main goal of the long-distance voyage is to ensure security of marine navigation and other types of Russia’s marine economic activity in the Arctic zone. One of the tasks of the voyage, which the Northern Fleet’s sailors are also accomplishing in the Arctic, is to provide search and rescue support and practice skills of rendering assistance to vessels in distress in high latitudes.