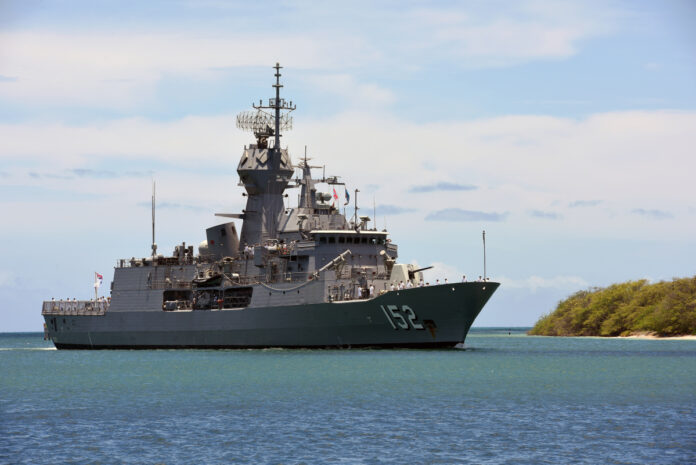 Second drug haul in a week as HMAS Warramunga seizes $181 million of illegal narcotics
Royal Australian Navy frigate HMAS Warramunga, with support from a United Kingdom Royal Navy helicopter, seized more than 3.5 tonnes of illicit narcotics during a night-time operation in the Arabian Sea on 3 January 2018.
Warramunga intercepted and boarded the suspect vessel, under the direction of the Combined Maritime Forces Australian-led Combined Task Force (CTF) 150 in international waters after the vessel was assessed to be engaged in possible illegal activity.
The interdiction came just days after Warramunga, which commenced Middle East operations in November 2017, seized narcotics from three vessels over the period 27–29 December.
During the course of the operation, the United Kingdom’s Royal Fleet Auxillary Fort Rosalie’s helicopter provided surveillance allowing Warramunga’s boarding party to locate and board the vessel.
The illegal narcotics are estimated to be valued at more than  $181 million, taking Warramunga’s total seizures to more than 11.5 tonnes of hashish and 69 kg of heroin, valued at approximately $596 million.
Warramunga is currently deployed to the Middle East on Operation MANITOU, Australia’s commitment to maritime security and stability in the region including the Combined Maritime Forces.
A coalition of 32 nations, the Combined Maritime Forces conducts maritime security operations to ensure the free flow of legitimate commerce in the region and to deny the use of the high seas to terrorist and illicit non-state actors.