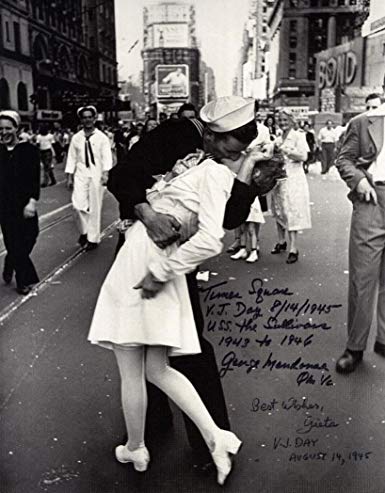 The sailor photographed kissing a woman in Time Square at the end of World War II has died.

George Mendonsa died after suffering a seizure at the assisted living facility in Middletown, Rhode Island, according to the Providence Journal. He was 95.

The August 14, 1945 photograph of Mendonsa kissing Greta Zimmer Friedman, who was wearing a nurse’s uniform, became one of the most famous photographs of the 20thcentury. It was taken by Alfred Eisenstaed and first published in Life magazine.

People were celebrating the end of World War II in the Pacific and flooded the streets of New York City. Mendonsa had said he had never met Friedman before that moment.

The photograph has inspired artists around the United States, including San Diego.