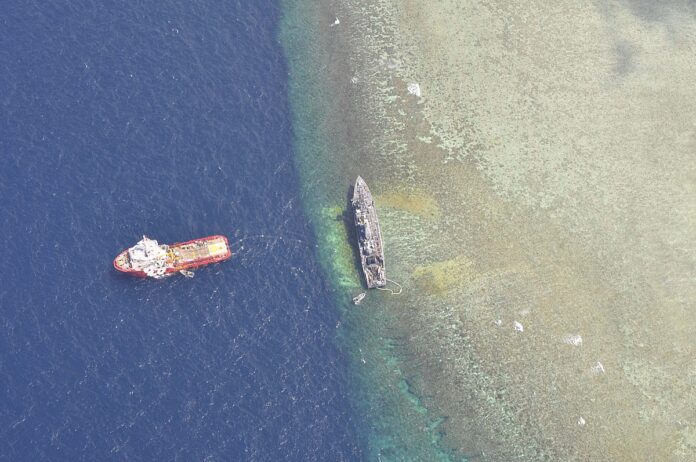 The last US Navy ship lost at sea was USS Guardian. On 17 January 2013, Guardian ran aground on Tubbataha Reef in the Phillipines. Unable to be recovered, the vessel was decommissioned and struck on 15 February 2013. After the removal of fuel and useful equipment, the ship was cut into three sections and lifted off the reef by crane ships.

USS Guardian (MCM-5) was an Avenger-class mine countermeasures ship of the United States Navy, and was the second Navy ship to bear that name. The hulls of the Avenger-class ships are constructed of wood with an external coat of fiberglass.

Guardian was laid down on 8 May 1985 by Peterson Builders, Sturgeon Bay, Wisconsin; launched on 20 June 1987; and commissioned on 16 December 1989. In 2010, she became the first mine countermeasures vessel in the Seventh Fleet modified for a mixed-sex crew, with separate head facilities.

On 17 January 2013, Guardian ran aground on Tubbataha Reef, in a protected area of the Philippines in the middle of the Sulu Sea. The vessel was turned and pushed further onto the reef by wave action. Unable to be recovered, the vessel was decommissioned and struck from the U.S. Naval Vessel Register on 15 February 2013. After removal of fuel and useful equipment, and after the upper superstructure was cut and lifted off of the minehunter, the wooden hull was sequentially chainsawed into four sections and lifted off of the reef by the dynamic positioning crane vessel MV Jascon 25. The bow section was cut and removed by crane on 26 March 2013. It was originally planned to cut the hull into three pieces, but the stern section had to be cut in half again. The last stern section was removed by crane from Tubbataha Reef on 30 March 2013.