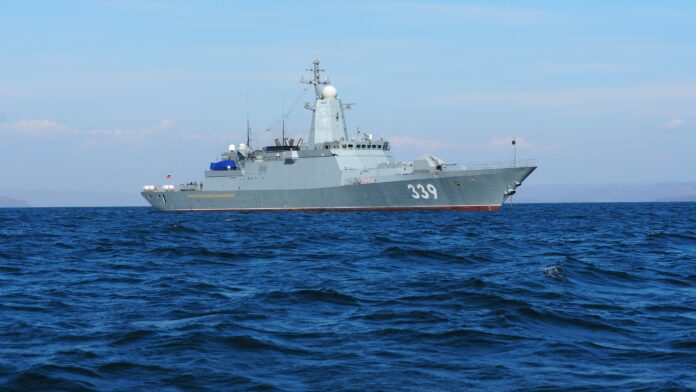 The latest corvette of Project 20380 (Steregushchiy-class), Aldar Tsydenzhapov, built for Russia’s Pacific Fleet conducted its first launch of an Uran cruise missile against a naval target in the Peter the Great Gulf in the Primorye Region, the Fleet’s press office reported on 25th November.

“The cruise missile successfully struck the surface target at a distance of about 40 kilometers from the warship at the designated time. Up to 10 ships and vessels, and also aircraft of the Pacific Fleet’s naval aviation were involved in the test-fire to provide security in the area and exercise control of the results of accomplishing the combat assignment,” the press office said in a statement.

The latest corvette fired the cruise missile as part of the shipbuilders’ and state trials. In the evening of November 24, the warship held a series of artillery firings in the Sea of Japan, in which it delivered fire against a sea ship screen from a 100mm A-190 multi-purpose artillery gun, the statement says.

The corvette incorporates the latest solutions for reducing its physical fields. In particular, the shipbuilders significantly reduced its radar signature during the construction, using radio absorption materials and specially designing the ship’s hull and superstructure.

Project 20380 ships are armed with multi-purpose artillery guns, surface-to-air missile/artillery systems, supersonic missiles and automatic artillery launchers. The Project 20380 corvettes can carry a Ka-27 helicopter. They displace 2,200 tonnes and have a crew of 99.

The corvette Aldar Tsydenzhapov is set to be accepted for service in Russia’s Pacific Fleet until the end of this year.