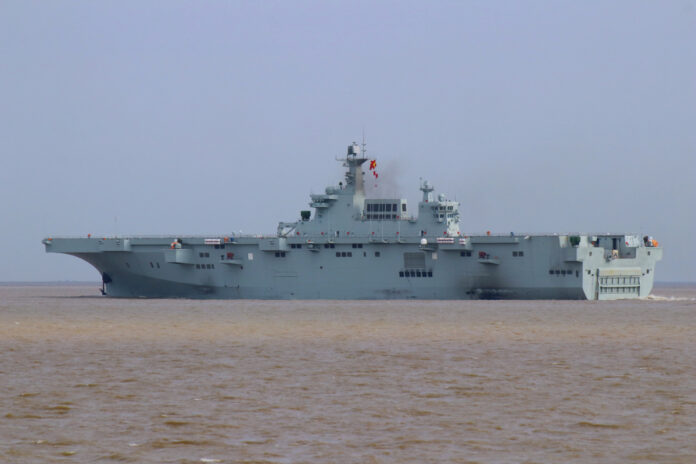 The first of China’s new Type 075 landing helicopter dock (LHD) appears to have recently embarked on a second round of sea trials—this time in the South China Sea, csis.org shared. The amphibious assault vessel left Hudong–Zhonghua Shipyard in early October and remained in the Shanghai area for nearly three weeks before sailing south. Toward the end of October, the Type 075 arrived some 1,250 nautical miles away, near China’s southern coast. Satellite imagery captured the Type 075 in the waters near Wuchuan on November 3 and moored at Yulin Naval Base on November 12. Subsequent imagery from November 17 showed the Type 075 had been joined by a support group of at least five vessels.

A critical component of China’s ongoing military modernization is enhancing the capabilities of the People’s Liberation Army Navy (PLAN), especially those that may be leveraged to project power or called upon in a contingency in China’s near seas. On this front, Type 075 considerably elevates China’s ability to transport, land, and support ground forces operating outside the Chinese mainland.

The vessel measures an estimated 237 meters in length and displaces between 35,000 and 40,000 tons, making it smaller than the Wasp- and America-class ships of the U.S. Navy—but still one of the largest amphibious assault ships in the world. The Type 075 features a full-length flight deck for helicopter operations, which in time could also serve as a platform for short takeoff and vertical landing aircraft, should China develop a reliable airframe for that environment. A floodable well deck situated in the stern of the vessel allows hovercraft and other vehicles to disembark. It is reported that the Type 075 will carry approximately 900 troops.

It remains unclear how exactly the PLAN will employ the Type 075, but it is a flexible platform suited for a variety of roles. In addition to bolstering China’s ability to carry out amphibious operations, the Type 075 (in particular, the helicopters it carries) could be charged with conducting anti-submarine warfare and supporting anti-piracy missions. The Type 075 may also provide critical support to humanitarian assistance and disaster relief efforts.

Regardless of how many Type 075s the PLAN fields or how they are eventually employed, the new class of ship nonetheless represents a significant step forward for enhancing China’s amphibious capabilities.