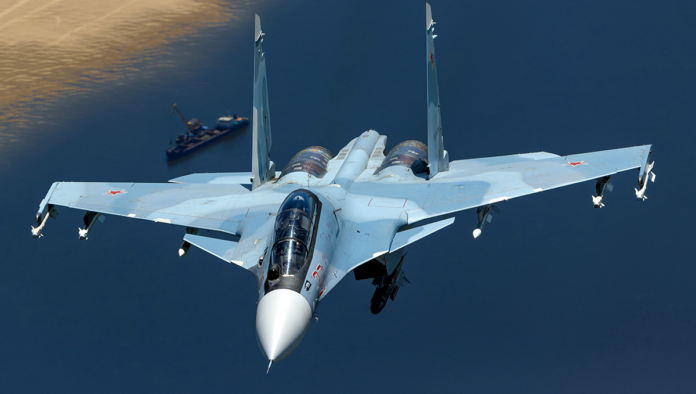 According to the Russian newspaper Izvestia, Russian Naval Aviation Command is planning to deploy two new air division headquarters at Kaliningrad and Crimea. Formation of compounds will be completed by the end of the year.

The new centres, named a “Combat Hubs” will control air operations in real-time over the sensitive Black and Baltic seas.

In Crimea, it was decided to revive the formation, which will become the assignee of the 2nd Guards Naval Missile Carrier of the Sevastopol Aviation Division, in the process of standing up at Novofedorivka Air Base near Saky. The new division will include the 43rd separate naval assault aviation regiment. It is armed with tactical front-line bombers Su-24 and multi-purpose fighters of generation 4 ++ Su-30SM. The 318th Mixed Air Regiment at Kacha Air Base will also come under its command, with its force of Antonov An-26 military transport aircraft, Beriev Be-12 anti-submarine amphibious aircraft, Kamov Ka-27 anti-submarine ship helicopters, and Ka-29 transport/combat helicopters.

In the Kaliningrad region, the formation of the 132nd mixed aviation division began. It will include the 4th Guards Naval Assault Air Regiment, armed with front-line Su-24 bombers and Su-30SM fighters. And also – the recently formed 689th Guards Fighter Aviation Regiment, which is due to receive the modernized Su-27SM and Su-35S in the near future. Finally, the 396th separate naval anti-submarine helicopter squadron, 125th separate helicopter and 398th separate transport will join the division. The location of the compound was the city of Chernyakhovsk.

The Kaliningrad region and Crimea are seen as potentially dangerous areas – the NATO countries bordering them have substantially strengthened militarily. The alliance’s interest in these regions is confirmed by an increase in the number of reconnaissance flights along the Russian border.

According to our sight, Russia has taken action at the Baltic Sea by releasing more than 10 submarines in recent days. We have been sharing the news of the movements of NATO and Russia to each other at Baltic Sea. Both sides made huge joint exercises in order to send a message of readiness. If we talk about the Black Sea, As we know clearly, Russia is quite disturbed by the U.S. existence. The U.S. Navy keeps sending warships to the Black Sea routinely in accordance with Montreaux Convention. Positions of the Battle Hubs are very conspicuous. They want to be aware of every movement of these areas and intended to establish recognized pictures at both air and surface.

What are the specifications of the “Battle Hubs”?

Modern automated control systems allow creating information bases where all information about the state of both its own and enemy troops is accumulated. They constantly update information on all planes and helicopters that are located at airfields and in the sky, as well as on land forces, submarines, ships and even military spacecraft. Thus, the division’s command will be able to observe the situation in the combat area in real time.

The new approach will allow for the full coordination of aviation in the region, and combat aircraft will be used with maximum efficiency. So, for example, ACS can automatically redistribute machines to the most dangerous areas. In addition, new squadrons and air regiments, which will arrive for reinforcement, can be connected to the system. In this case, the division headquarters will work as a combat hub, which will distribute aviation depending on the situation.

Restoration of the air divisions in Russia began in 2015. During the reforms, units and formations were eliminated, and aircraft and helicopters structurally became part of the airbases.