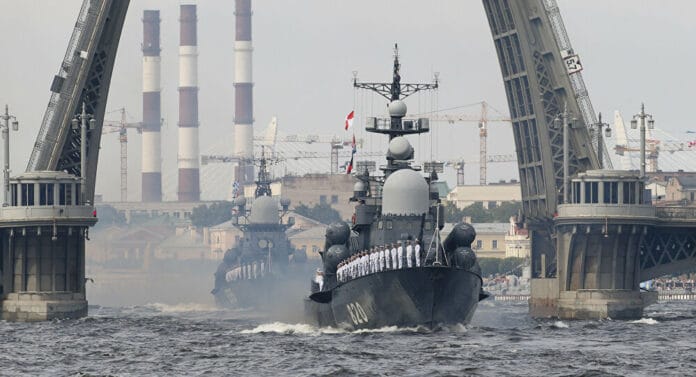 The final rehearsal of the Main naval parade for Russian Navy Day which will take place on July 26, took place in water territories of St. Petersburg and Kronstadt, Russian Ministry of Defense announced.

“A total of 46 military ships, submarines, vessels and boats of various classes took part in the general rehearsal. […] The share of new-generation ships in the parade increased, compared to 2019,” the press service said.

The parade of the Navy Day was also joined by Navy aviation planes and helicopters – more than 40 units total.

According to Russian Navy deputy commander Vice Admiral Vladimir Kasatonov, the rehearsal tested the readiness of the ships and the crews, and tested the skills obtained in training.

“We emphasize timing, precision of all maneuvers, precision of the order. […] Such number of ships in Neva River is a difficult task, of course. Neva is generally a difficult area to navigate,” he told journalists.

Another rehearsal also took place in Baltiysk, the Kaliningrad Region, led by Baltic Fleet commander Admiral Alexander Nosatov. According to the Fleet press service, it confirmed the participants’ readiness to the festive event, planned for Sunday.