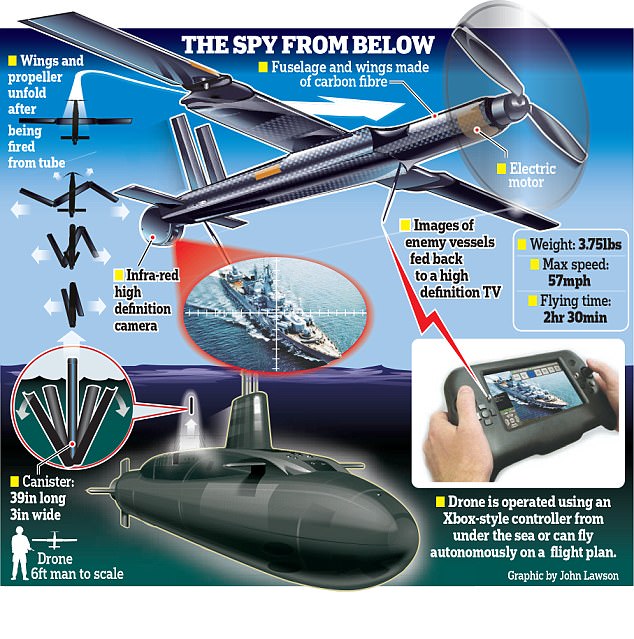 Royal Navy submarines could soon launch drones from beneath the waves.
The cameras can spy from the sky for two-and-a-half hours and travel at up to 57mph
Sailors on the UK’s nuclear-armed submarines would be able to fire a canister that releases a drone once it hits the surface. In a new phase of robotic warfare, the 3.75 lb drones can then be operated from under the sea or made to act autonomously.
The ‘Outrider’ drone, which is almost silent, feeds back images of enemy vessels to a high definition television so the submarine knows where to either avoid or target.
The Outrider drone can be launched at the press of a button from a range of platforms, including submarines, ships or by Special Forces travelling in armoured vehicles.
It can be flown in fully autonomous mode, in which it will follow a pre-programmed flight plan mapped out by submariners.
Alternatively in remote pilot mode, the operator can control the drone using thumb-sticks built into a specially adapted handset, or by plugging the controller into a laptop.
The drone is deployed by firing a 39in long canister from the submarine into the water. Once it hits the air, the shell falls apart and the drone unfurls its wings.
Currently it is designed for spying and does not carry weapons. It can be used to detect surface ships, or survivors in the case of search and rescue missions. It would also be able to spot submarines near the surface.
The drones are currently not reusable, and cannot return to the submarine, but can be recovered if flown on to land.