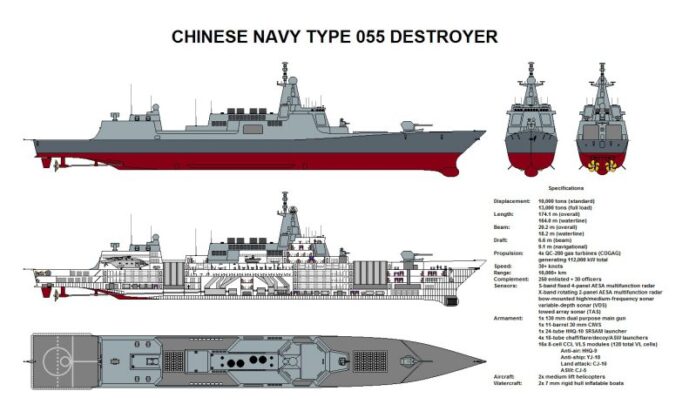 The first Type 055 destroyer is being outfitted at Jiangnan Shipyard (Group) in Shanghai.
Workers are installing conduits and cables in the 10,000-tonne vessel, Zhou Xin, a military representative stationed in the shipyard to oversee the building of the warship, was quoted by the People’s Liberation Army Daily as saying.
The destroyer entered the water in late June 2017, marking a milestone in improving the nation’s navy armament system and building a strong and modern navy.
It will be equipped with new air defense, anti-missile, anti-ship and anti-submarine weapons.
Construction of the destroyer has focused on improving the ship’s fighting capability, another military representative, Leng Jun, was quoted as saying in the report.
After soliciting opinions from military officers and soldiers, designers changed the original plan for helicopters on the warship, increasing the height of the cabins to improve the passing efficiency, the PLA Daily said.
A new welding technique was explored and used in building the outer hull, which was made of a new type of material, the report said.
To provide a more comfortable environment for soldiers on the ship, workers used new materials to protect against shock and noise and increased ventilation equipment in the destroyer’s living cabins.
The vessel will have to undergo planned testing, including equipment operation, berthing and sailing, before it is commissioned for use.