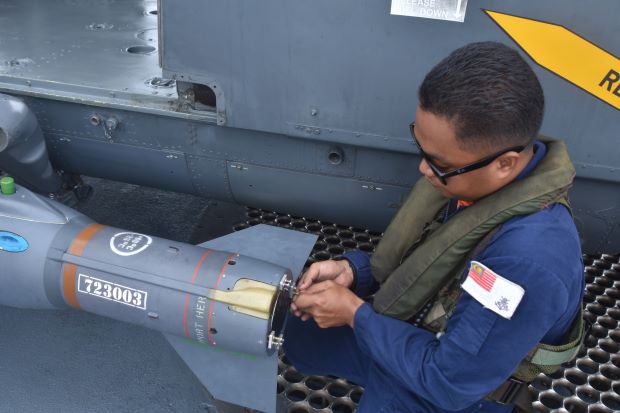 MALAYSIA has flexed it’s military muscles as it launched anti-ship missile test in the South China Sea as a warning to Xi Jinping. The Royal Malaysian Navy has successfully tested guided missiles via their assets off the waters of the South China sea during the KerisMas Exercise recently. They launched Exocet MM40 Block II guided missiles from KD Kasturi ship and the Sea Skua guided missile from the Super Lynx helicopter.

Malaysian defence minister Mohamad Bin Sabu said in a statement: “The success of the missile firings is proof that the RMN is able to undertake operations in the South China Sea.

“The execution of these exercises will assure the maritime community, especially those on the eastern seaboard of peninsular Malaysia, that the RMN and the Malaysian Armed Forces stand ready to uphold peace and defend their interests in the South China Sea.”

“The last time such a firing was conducted was in 2014. After five years, it gives us a chance to test the readiness of the guided missiles, missile platform, as well as the personnel assigned.

“The guided missiles were fired, and they were on target.

“While this is not unusual, it is very important to the Navy as it proves our assault capabilities to the public and other countries in the region,” he told a special press conference on Tuesday (July 23).

The successful firing of the missiles justified taxpayers’ investment in military assets, he added.

“It shows that we are always at the highest form of readiness in ensuring that our assets and weapons systems are functioning at an optimum level,” he said.

The Exocet is a French-built anti-ship missile whose various versions can be launched from surface vessels, submarines, helicopters and fixed-wing aircraft. The MM40 Block II hhasa range of 72km.

The Sea Skua is a British lightweight short-range air-to-surface missile (ASM) designed for use from helicopters against ships. It is primarily used by the Royal Navy on the Westland Lynx. Although the missile is intended for helicopter use, Kuwait employs it in a shore battery and on their Umm Al Maradem (Combattante BR-42) fast attack craft.