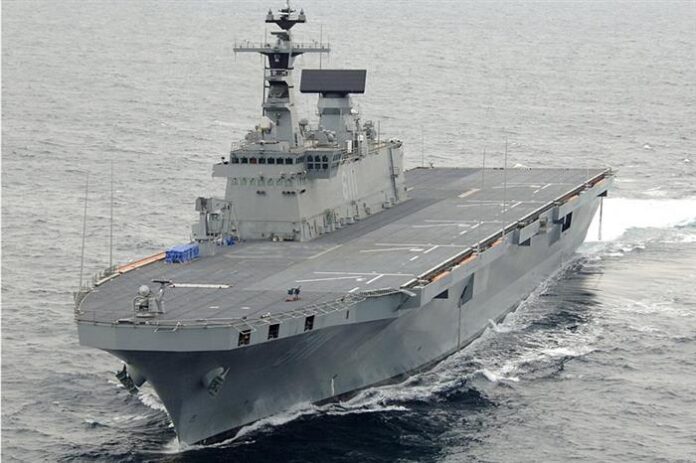 South Korea takes its first step towards construction of a “light aircraft carrier” by late 2020s.

According to multiple reports, the Ministry of National Defense approved the Republic of Korea Navy’s request for “Next Generation Large Transport Ship (LPX-II)” program during a Joint Chiefs of Staff meeting held on July 12th.

This is the newest addition to the Navy’s “long-term force requirement” roadmap, which lays out Navy’s major projects beyond 2026. LPX-II is a successor of LPX-I program, which resulted in construction of two Dokdo-class amphibious assault ship.

LPX-II will be a conventionally-powered 30,000 tons vessel with a bow ski jump. It will carry 16~20 F-35B Lightning II stealth fighters, which will be acquired through “Next Generation Fighter (FX-II)” program. It will also house 3,000 Marines and 20 armored vehicles.

Approximately $2 billion will be required for the LPX-II’s construction, and additional $1 billion for acquisition of F-35B fighters.

Originally, 20 additional F-35A were to be acquired via FX-2 program. But it’s now likely that they’ll be replaced with F-35B.

ROKN has been pursuing for aircraft carrier since 1990. It acquired and studied ex-Soviet aircraft carrier Minsk before it was dismantled. Dokdo-class was designed to carry and operate 8 AV-8 Harrier jets, although they were never acquired.

The modifications should result in the Japanese fleet operating, for the first time since World War II, flattops with fixed-wing aircraft.

The Chinese navy has two carriers. Another is under construction. Beijing’s fleet could possess as many as six aircraft carriers by the mid-2030s, experts told state media. They could be a mix of conventional and nuclear-powered vessels.

Even the smallest Chinese carrier displaces around 60,000 tons of water, making it twice as big as South Korea’s own, future flattop.