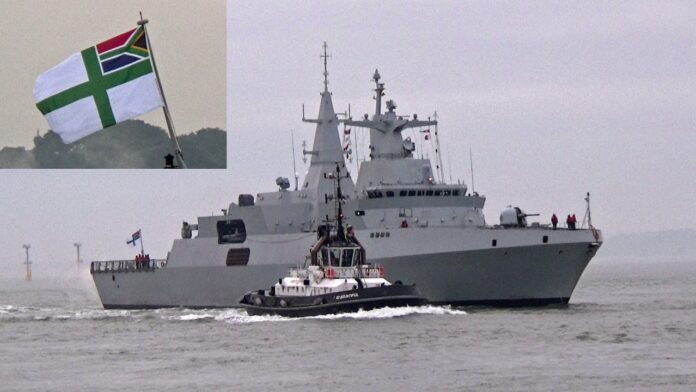 Operating naval force is a quite expensive process for countries. It’s like riding a bicycle, you need to keep pedaling if you don’t want to fall down. Naval equipment are not only expensive to buy or built, but also requires big funds to maintain. Though you buy or built the most developed weapons, if you cannot reimburse the maintenance costs, you would lose the capability you earn with that equipment.

If the current state of funding continues, The South African Navy could face the risks of losing its frigate and submarine capabilities through upcoming years. This issue was stated by the Chief of the South African Navy (SAN), Vice Admiral Mosiwa Hlongwane, who briefed the Parliamentary Joint Standing Committee (JSCD) on Defence on the status of the Navy last week.

Hlongwane said that due to various capacity constraints, primarily resulting from the insufficient budget allocation, the Navy is unable to achieve the planned sea hours target due to the unavailability of naval vessels. It requires a minimum of 12 000 hours at sea per year to train sufficient personnel to keep vessels in the operating cycle and operational. The Navy, however, is only resourced for 6 000 hours at sea.

The real crisis is evident when reviewing the vessel maintenance and repair budget. Out of a 2019/20 requirement of R1.191 billion, just R276 million is allocated. This amount, Hlongwane said, “is nothing.”

Shockingly, the total refit budget from 2019/20 to 2022/23 totals just R223 million, not enough for even one submarine. Said Hlongwane: “Only insufficient and partial maintenance and repairs can therefore be effected, impacting negatively on achievable hours at sea.”

“The accumulated backlog in refits of frigates, submarines and other vessels, due to sustained underfunding, severely constrains the Navy from executing its core function,” Hlongwane lamented. “The continuing refit delays are impact negatively on future projects and availability of capabilities to meet the Joint Force Employment Requirements to conduct operations including Operations Copper and Corona.”

As a result, Hlongwane said, the number of required hours at sea per year will inevitable decline further, if no refits are done.

The SAN is experiencing the loss of scarce skills for which the budget does not allow adequate replacement. “The Navy Engineering capability is now extremely limited, which will increasingly impact on the safety and seaworthiness of ships and submarines and their ability to deploy,” said Hlongwane.

Most facilities and infrastructure are old and dilapidated and require more maintenance and restoration/upgrades, particularly the synchrolifts in Simon’s Town and in Durban Naval Bases.

Should the refits not be able to be funded and executed, the Navy will over the medium term lose its frigate capability, then its submarine capability, leaving its patrol capability highly restricted.

The delivery of the Project Biro Multi-Mission Inshore Patrol Vesselsand Project Hotel Hydrographic Survey Vessel from 2021/22 onwards will not lead to improved sea hours, due to them only replacing obsolete vessels, with both projects underfunded.

As we understood from the speech of admiral, if you want to say “I am here” at sea, you need enough funds to maintain and upgrade your force. Otherwise officials could have to make such statements to uncover the truth.