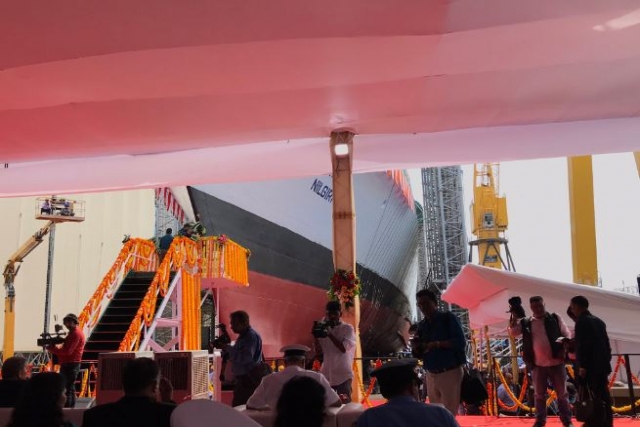 “The INS Nilgiri is the first of the Indian Navy’s seven new stealth frigates with enhanced stealth features fitted with state-of-the-art weapons and sensors,” Rajnath Singh, Defense Minister of India, announced in a tweet.

The launch took place at the dockyard of Mazgaon Dock Shipbuilders Limited. The Chief of Naval Staff Admiral Karambir Singh and other officials were also present on the occasion along with the Defence Minister and his wife.

Furthermore, Rajnath Singh said, “We are making concerted efforts to modernise the Navy and equip it with the best platforms, weapons, and sensors. Our government under the leadership of Prime Minister Shri Narendra Modi is aware that, any credible defence of a country is based on the indigenous defence capability. Construction of submarines not only benefits the industry but also helps evolve a positive culture of stringent quality control and complex engineering. It brings plough-back benefits for the economy of the nation at large with significant contributions towards ‘Make in India'”

The Nilgiri-class frigate or Project 17A is follow-on of the Project 17 Shivalik-class frigate for the Indian Navy. A total of seven ships will be built at Mazagon Dock and GRSE.

The INS Nilgiri Shivalik-class frigate is build based on a stealth design with covered mooring deck and the number of antennae on the ship will be reduced by using EL/M-2248 MF-STAR AESA radar. The P17A will also feature better roll stabilization and a discreet visual profile. The weapon platform in the P17A ships is compact and armed with 32 Barak 8 and 8 BrahMos missiles.£

The Project 17A frigate is also armed with one Oto Melara 127 mm main gun unlike the Indian Navy existing fleet of ships that use 76 mm and 100 mm guns.

The Nilgiri-class frigate powered by two General Electric LM2500 gas turbines and two MAN manufactured diesel engines. This will help the frigate achieve a top speed of 28 knots and a range of 5,500 nautical miles at a speed of 10-15 knots.

The INS Nilgiri frigate has a crew of 150 sailors including 35 officers.