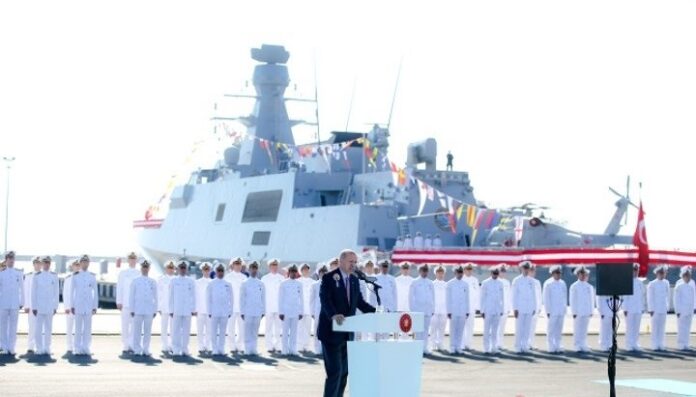 Today was the day to be proud for Turkish defense industry. Because 4th and the last MILGEM (ADA) Class Corvette TCG KINALIADA (F-514) has been delivered to Turkish Navy with a ceremony at Istanbul Shipyard with the attendance of President Recep Tayyip Erdogan. After the comissioning ceremony, the steel-cutting ceremony for the first MİLGEM-class (National Ship) ship to be sold to Pakistan was also conducted.

In his speech, Erdogan said he hoped the Kinaliada (F-514), an Ada-class corvette, will benefit the Turkish nation and its sailors and further hopes Pakistan, a friendly nation to Turkey, will also benefit from the ship whose construction started today.

“Our navy, rich with glorious victories, is carrying this legacy into the future by further strengthening it,” he said.

Erdogan said recent events globally and especially in the Mediterranean point to the need to strengthen Turkey at sea, as in all other areas.

While the design, construction and integration activities of TCG Kınalıada were carried out at Istanbul Naval Shipyard Command, numerous simultaneous projects within the scope of design, research-development, supply, and service procurement required for these activities were undertaken by the Defense Industries Presidency (SSB) in accordance with the domestic and national facilities.

Meanwhile, Advent, a Network Supported Combat Management System developed jointly by HAVELSAN and Turkish Naval Research Center Command (TNRCC), is being used for the first time on this vessel.

The 99-meter-long and 14.4-meter-wide TCG Kınalıada is a single hull displacement boat developed to meet the speed, maritime and stability demands of the Turkish Navy.

While TCG Kınalıada can reach a maximum speed of 29-plus nautical miles, it has the necessary platform, hangar and extensive support equipment for a 10-ton helicopter and can perform helicopter flight operations up to sea state four.

Equipped with advanced technology sensors, electronic warfare, navigation, and communication systems, most of which have been developed with domestic facilities, TCG Kınalıada has also been designed with defense, deception, mixing and elimination systems for asymmetrical, surface, air and underwater threats.