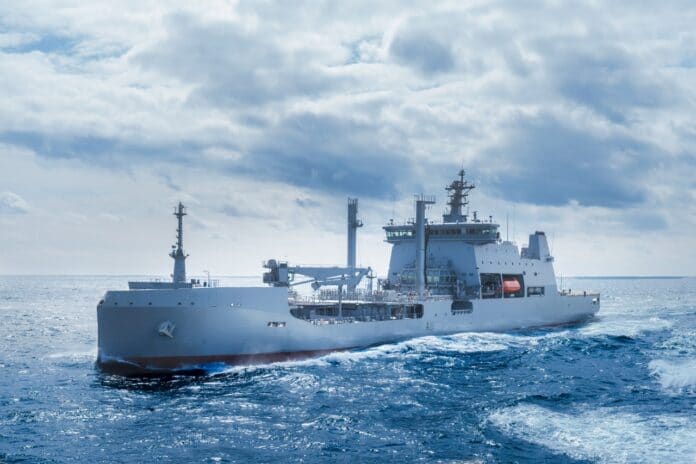 HHI announced today that it held a sail-off ceremony for RNZN’s the latest 26,000-ton logistics support vessel,HMNZS Aotearoa on June 10.

The vessel, measuring 173.2m in length and 24.5m in width will support operations for RNZN through supplying fuel, food, water and ammunition.

The Republic of Korea Navy (ROKN) deployed ROKS Daecheong (AOE-58) to the ceremony to wish for a safe voyage of Aotearoa.

The departure is notable that Korea successfully exported logistics support vessel based on advanced technology to the country that sent warships to Korea during the Korean War.

In addition, Korea and New Zealand have been building trust relations, with the Defense Acquisition Program Administration and the New Zealand Ministry of National Defense signing a “Defense Material Cooperation Arrangement” last year to expand cooperation in the defense sector between the two countries.

A Senior Executive Vice President of HHI Mr. Nam said, “We are honored to have demonstrated our excellent naval ship design and construction capabilities by delivering HMNZS Aotearoa despite COVID-19.”

New Zealand Ambassador of Korea Mr. Philip said, “We’d like to thank HHI for its efforts to ensure the successful delivery of the Royal New Zealand Navy’s largest-ever ship. The close cooperation between HHI and its subcontractors and New Zealand Ministry of Defence Project Team on the basis of mutual trust is what made the delivery of the ship possible.” He added, “We expect the ship which is as versatile as its size will be able to carry out many activities, including disaster relief activities.”

Since the delivery of the first Korean-built frigate ROKS Ulsan in 1980, HHI has played a pivotal role in the modernization of ROK Navy designing major warships. And evidently it now expands its service to worldwide navies with advanced, affordable warships. HHI is now focusing its capabilities on the concept design of the LPX-II, while also speeding up preparations for the Korean-style KDDX project.