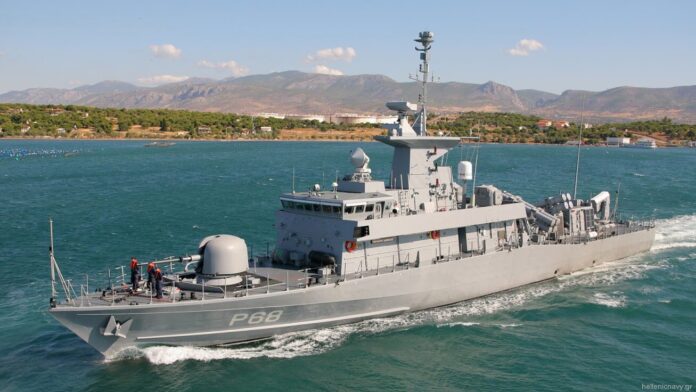 Hellenic Navy’s Super Vita (Roussen) Class ship’s story finally comes to a solution. There were many reasons of delay of their comissioning, but, finally Hellenic Navy announced the sea trials of 6th Super Vita Class fast attacking craft (FAC), with hull number P78. It took about more than 10 years, comissioning of the ship would be very reileving for Hellenic Navy.

As reported by the General Staff of the Navy regarding the development of the shipbuilding program No 6 and No. 7 in the Elefsina shipyards, the final ship acceptance tests (HAT, SAT) of the 6th boat are planned to be executed in the third quarter of this year, according to Hellenic Navy.

Here is the whole announcement ;

The Navy General Staff announced that on Tuesday, July 23, 2019, during the preliminary inspections of the installation of the systems of the 6th missile under construction, a limited duration sailing was carried out in Elefsina Gulf with the presence of personnel of the Navy (Nautical Elefsina).

The ship’s final acceptance tests (HAT, SAT) of the No. 6 missile are scheduled to be executed in the third quarter of this year.”

The contract for the 3 Supet Vita Class boats between Greece and BAE was signed in January 2000. The construction took place at the Elefsis Shipyards, while Vosper Thornycroft (now BAE Systems Maritime) provided the design, logistical support and equipment for the ships. On August, 2003 and September, 2008 options that provided the acquisition of four more vessels were activated with the last ship to be commissioned in 2015.

Here is the specifications of Roussen class FACs :